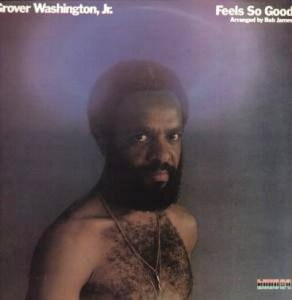 Can you believe that Feels So Good topped both the soul and jazz albums charts and peaked at number ten on the pop album charts in the 1975?! Quite an achievement for our man Grover here. He had earlier made an album with Bob James handling the arrangements for the very large group of musicians on hand, as well as playing playing keyboards, and that album has been a personal favorite of mine for more than forty years, All the King’s Men.

A few years later Grover Washington would put out Winelight, another must own soul jazz album.

Now we have this one, with a White Hot Stamper side one no less.

The sweetness and transparency of Grover Washington Jr.’s breathy sax on side one went beyond any other copy we played. Who knew it could sound (feel) so good? We sure didn’t.

There’s so much life in these grooves. The sound jumps out of the speakers right into your lap.

Of special note, this copy has amazingly articulate bass which brings out the undeniable funkiness of the music in a way that no other copy on side one did. As Allmusic noted:

“… regardless of the name above the title, bassist Louis Johnson is the real star of the show. His supple rhythms percolate like coffee.”

The early ’70s were a good time for Van Gelder. All the King’s Men from 1973 is an amazing Demo Disc for large group. But it only sounds good on the copies that it sounds good on, on the pressings that were mastered, pressed and cleaned right, a fact that has eluded most jazz vinyl aficionados interested in good sound.

But not us. We’ve played the very special pressings that prove the album can sound amazing.

The sound we most often find on original pressings (the only ones that ever sound any good; the later pressings are awful) is full of heavy compression, and suffers as well from the kind of high frequency restriction that prevents the top end from extending in a harmonically correct way. The result: Grover’s horn often will take on a somewhat sour quality. Our better Hot Stampers are uncompressed and the top end is open. That’s what makes them Hot Stampers.

It Feels So Good
Hydra

The aptly titled and much-sampled Feels So Good represents the creative apex of Grover Washington, Jr.’s sublime electric funk sound. Its shimmering, soulful grooves refute the argument that smooth jazz is little more than mere ambience, combining expert playing and intricate songwriting to create music that is both compelling and comforting. Arranger Bob James is in top form here, creating the spacious, rich milieus that are his trademark, but regardless of the name above the title, bassist Louis Johnson is the real star of the show. His supple rhythms percolate like coffee.