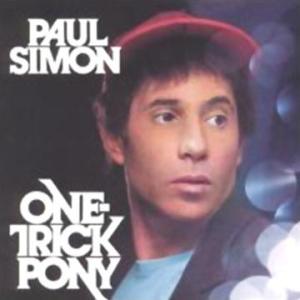 This original white label Warner Brothers pressing has the kind of Tubey Magical Midrange that modern records can barely BEGIN to reproduce. Folks, that sound is gone and it sure isn’t showing signs of coming back. If you love hearing INTO a recording, actually being able to “see” the performers, and feeling as if you are sitting in the studio with the band, this is the record for you. It’s what vintage all analog recordings are known for — this sound.

What We’re Listening For on One-Trick Pony

Late In The Evening
That’s Why God Made The Movies
One-Trick Pony
How The Heart Approaches What It Yearns
Oh, Marion

Ace In The Hole
Nobody
Jonah
God Bless The Absentee
Long, Long Day

Though it was released to coincide with the opening of the film One-Trick Pony, which Paul Simon wrote and starred in, the One-Trick Pony album is not a soundtrack, as it is sometimes categorized, at least, not exactly. If it were, it might contain the Paul Simon song “Soft Parachutes” and other non-Simon music featured in the movie. Instead, this is a studio album containing many of the movie songs, some of them in the same performances (two were cut live at the Agora Club in Cleveland).

. . . Tasty licks abound from the fretwork of Eric Gale, Hiram Bullock, and Hugh McCracken, and the rhythm section of Steve Gadd, Tony Levin, and Richard Tee is equally in the groove. This is the closest thing to a band album Simon ever made, and it contains some of his most rhythmic and energetic singing. . .