I first heard this album on the wonderful Classic Records pressing from the ’90s. I remember really enjoying the music and liking the sound of Bernie Grundman’s remaster very much. We reviewed and recommended the album (along with Under the Stars) in our old paper catalogs.

You may have seen Russell Garcia’s name on one of the landmark recordings of the ’50s: Ella Fitzgerald and Louis Armstrong’s recording of Porgy and Bess for Verve in the previous year, 1959.

… prime samplings from the autumn of Armstrong’s recording career. Even in the pressure cooker of a marathon session, even when confronted with standards not often associated with him, Armstrong finds the essence of each tune, bending and projecting them with his patented joie de vivre and gravel-voiced warmth every time.

In particular, “When Your Lover Is Gone” is sublime, with its signature riff of blasé, sighing horns and responding, rising string tremolos… a seductive nighttime ambience that’ll draw you in every time. 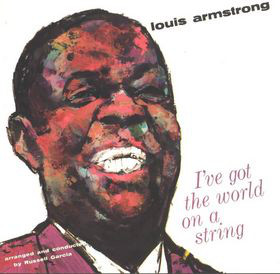