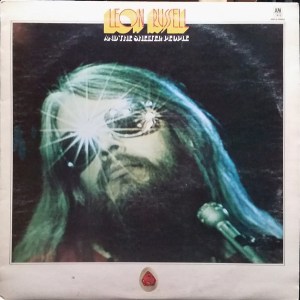 The domestic pressings of Leon Russell and the Shelter People that we’d auditioned over the years always seemed flat, dry, and closed-in. We know that sound well; it’s the sound you hear on records that have been made from dubbed tapes (and it’s the hallmark of the modern Heavy Vinyl reissue, truth be told). It bores us to tears, and had us questioning what we could possibly have seen in the album in the first place. What happened to the glorious sound of early ’70s analog we were expecting to find?

American artist, American pressing? A good rule of thumb but one that breaks down badly on this album, and for two obvious reasons: the very British engineering team of Andy and Glyn Johns.

If you know Graham Nash’s Song for Beginners (a permanent member of our Top 100 Rock and Pop List) and a masterpiece of engineering, that should give you a good feel for the sound of the best copies of Leon Russell and the Shelter People.

The Ballad of Mad Dogs and Englishmen
It Takes a Lot to Laugh, It Takes a Train to Cry
She Smiles Like a River
Sweet Emily
Beware of Darkness

Leon Russell didn’t get to be the World’s Champion Hip Okie by accident. He earned it on Stones sessions, by writing “Give Peace a Chance,” by teaming up with Joe Cocker — and he’s just paid more dues with Leon Russell and the Shelter People, one of the best rock albums so far this year.

Russell practically invented what might as well be called Okie rock — with that shit-kicker Gospel sound, heavy on Baptist-revival piano and chorus — and it gets as good on this album as you’ll ever hear.

He works wonders on Dylan’s “It’s a Hard Rain Gonna Fall,” wails through a lovingly ironic piano-pounding tribute to Little Richard on “Crystal Closet Queen” and lopes through “She Smiles like a River,” a rolling hill-folky ballad apparently inspired by “Life Is like a Mountain Railway.” And there’s more — much more.

Leon Russell and the Shelter People is a prime example of Russell’s instrumental dexterity and ability to produce some energetic rock & roll.

Poignant and expressive tracks such as “Of Thee I Sing,” “Home Sweet Oklahoma,” and “She Smiles Like a River” all lay claim to Russell’s soulful style and are clear-cut examples of the power that he musters through his spirited piano playing and his voice.

His Dylan covers are just as strong, especially “It’s All Over Now, Baby Blue” and “It Takes a Lot to Laugh,” while “Love Minus Zero/No Limit” and “It’s a Hard Rain Gonna Fall” have him sounding so forceful, they could have been Russell’s own.

A hearty, full-flavored gospel sound is amassed thanks to both the Shelter People and the Tulsa Tops, who back Russell up on most of the tracks, but it’s Russell alone that makes “The Ballad of Mad Dogs and Englishmen” such an expressive piece and the highlight of the album.