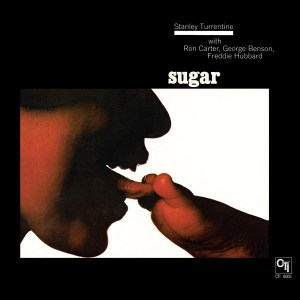 What the best sides of Sugar have to offer is not hard to hear:

What We’re Listening For on Another Story

We’ve been really digging this CTI jazz stuff for years now. On the better albums such as this one, the players tend to sound carefree and loose — you can tell they’re having a heck of a time with the material. Don’t get me wrong — we still love the Blue Note and Contemporary label recordings for our more vintage jazz needs, but it’s a kick to hear top jazz musicians laying down these grooves and not taking themselves so seriously… especially when it sounds this good!

The fact of the matter is that the sound of the master tape Rudy Van Gelder engineered almost never ends up on the record. If it did we’d be out of business by now. You have to work to find the good RVG pressings. When you do find one, they can be as good as any jazz recording you have ever heard.

The late ’60s and early ’70s were a good time for Rudy Van Gelder. Freddie Hubbard’s Red Clay is from 1970, this album is from 1971, Grover Washington’s All the King’s Men from 1973, and all three are amazing sounding recordings in their own right, the first for quintet, the last for large group, and this one in the middle with the 8 great players seen below.

Turrentine is deep inside his horn, ringing out in legato with everything he has — and it is considerable. Ron Carter’s bass playing flows through the modal interludes, creating a basis for some beautifully intervallic invention by Benson and Smith by building a series of harmonic bridges through the mode to solos. It’s hard to believe this is Turrentine, yet it could be no one else. If jazz fans are interested in Turrentine beyond the Blue Note period — and they should be — this is a heck of a place to listen for satisfaction.

One of the main weapons in sax legend Stanley Turrentine’s arsenal was the knowledge that a real groove requires just the right amount of energy without hitting the listener over the head. That knowledge is put to practical use throughout Turrentine’s first recording for CTI, SUGAR.

Aided by the subtly soulful organ of Butch Cornell and the smoldering sensuality of George Benson’s guitar, Turrentine churned out solidly grooving (though not literally “funk”) tunes that employ blues-based economy and bob-schooled chops in equal measure. The fiery trumpet interjections of Freddie Hubbard keep things moving, but Turrentine’s mastery of the mid-tempo groove is exemplified throughout, whether on the down-and-dirty jam “Sunshine Alley” or a soulful take on John Coltrane’s “Impressions.”

And don’t worry, the music is leagues more tasteful than the questionably raunchy cover art. [the cover is not sexual; it’s a mother licking here child’s foot.]

A legend of the tenor saxophone, Stanley Turrentine was renowned for his distinctively thick, rippling tone, an earthy grounding in the blues, and his ability to work a groove with soul and imagination. Turrentine recorded in a wide variety of settings, but was best-known for his Blue Note soul-jazz jams of the ’60s, and also underwent a popular fusion makeover in the early ’70s.