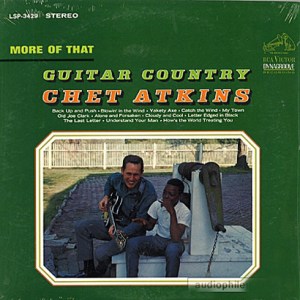 We owe a debt of gratitude to Harry Pearson for pointing out to us with his TAS Super Disc List what great recordings Chet Atkins was making back in the ’50s and ’60s, although I’m pretty sure anybody playing those albums would have no trouble telling after a minute or two that a great many of them are very special indeed.

But were audiophiles playing these kinds of records before Harry Pearson came along? Unlikely. In the ’70s he practically single-handedly legitimized vintage pressings of all kinds for audiophiles to search out and enjoy.

This vintage RCA pressing has the kind of Tubey Magical Midrange that modern records can barely BEGIN to reproduce. Folks, that sound is gone and it sure isn’t showing signs of coming back. If you love hearing INTO a recording, actually being able to “see” the performers, and feeling as if you are sitting in the studio with the band, this is the record for you. It’s what vintage all analog recordings are known for —this sound.

What do we love about these vintage RCA Hot Stamper pressings? The timbre of every instrument is Hi-Fi in the best sense of the word. The instruments here are reproduced with remarkable fidelity. Now that’s what we at Better Records mean by “Hi-Fi”, not the kind of Audiophile Phony BS Sound that passes for Hi-Fidelity these days.

There’s no boosted top, there’s no bloated bottom, there’s no sucked-out midrange. There’s no added digital reverb (Patricia Barber, Diana Krall, et al.). The microphones are not fifty feet away from the musicians (Water Lily) nor are they inches away (Three Blind Mice).

What We’re Listening For on More Of That Guitar Country

The followup album to Guitar Country, More of That Guitar Country spawned a bigger hit than anything on its predecessor — or anything in Chet Atkins’ long career for that matter.

That tune was “Yakety Axe” — a retitled cover of Boots Randolph’s “Yakety Sax,” which itself was inspired by the Coasters’ “Yakety Yak” — a rapid-fire, barnyard-flavored tune that rose to number four on the country singles charts of 1965.

As it happens, this was a deceptively flamboyant leadoff track for one of Atkins’ least-cluttered, mostly reined-in, and most musical albums of the mid-’60s, searching for good material wherever he can find it, even outside the cloistered world of Nashville.

With a subdued intro as a temporary decoy, “Old Joe Clark” gets exactly the kind of fingerpicking, fingerbusting performance fans expect from this guitarist.

The Johnny Cash hit “Understand Your Man” gets a neat, genteel, two-beat rendition that reminds one of its close resemblance to Bob Dylan’s “Don’t Think Twice, It’s Alright” — and Dylan himself is represented by an early (for Nashville) countrified cover of “Blowin’ in the Wind.”

Jerry Smith (piano) and Charlie McCoy (harmonica) are among the session regulars who keep the Nashville music machine running smoothly behind Atkins.