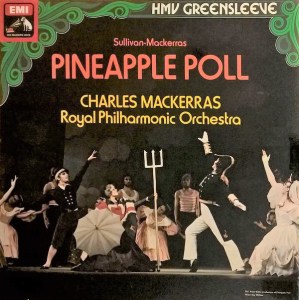 What the best sides of this wonderful release have to offer is not hard to hear:

EMI’s are usually recorded with a mid-hall perspective, which is somewhat distant for our taste. That’s not our sound. We prefer the Front Row Center seats (especially at these prices). That said, when an EMI from the ’60s is recorded, mastered and pressed properly, it actually sounds more like the real thing, more like the actual live performance of orchestral music in a concert hall.

It’s uncanny how real the best copies of this record sound.

What We’re Listening For on Pineapple Poll Ballet

Background and Productions of Pineapple Poll

Mackerras and his family were Gilbert and Sullivan fans. As a youth, at the all-male St Aloysius College in Sydney, he played Kate in The Pirates of Penzance, Leila in Iolanthe and Ko-Ko in The Mikado. In 1941–42, while at the NSW State Conservatorium of Music, he played the oboe for the J. C. Williamson Company during one of their Gilbert and Sullivan seasons. He was also a rehearsal pianist for the Kirsova ballet company, where he became familiar with the successful ballets based on Offenbach, Strauss and Rossini music: Gaîté Parisienne, Le Beau Danube and La Boutique fantasque. He felt that a similar arrangement of the music of Sullivan would also be popular.

He had to wait a decade until the copyright on Sullivan’s music expired at the end of 1950. Meanwhile, Mackerras had moved to London, studied conducting in Prague and, in 1948, become assistant conductor and repetiteur for Sadler’s Wells Opera. Peggy van Praagh suggested that he work out the idea with the young choreographer John Cranko. Cranko expanded the plot of W. S. Gilbert’s Bab Ballad “The Bumboat Woman’s Story”, in which the central character is named Poll Pineapple. The Gilbert and Sullivan opera H.M.S. Pinafore (especially its character Little Buttercup) was also based, in part, on this story. Cranko introduced new characters (Mrs Dimple) and gave Poll an admirer to enable a happy ending. Mackerras arranged the score of Pineapple Poll from the Gilbert and Sullivan repertoire, as well as Sullivan’s comic opera Cox and Box (written with F. C. Burnand), and Sullivan’s Overture di Ballo. Music from all of the extant Gilbert and Sullivan operas is included, except for Utopia Limited and The Grand Duke.

Pineapple Poll premiered on 13 March 1951 at Sadler’s Wells Theatre by the Sadler’s Wells Ballet as part of the Festival of Britain. It was part of an evening of four Cranko ballets. The production was designed by Sir Osbert Lancaster, who later designed the 1971 D’Oyly Carte production of The Sorcerer. The ballet was a critical and popular success Sadler’s Wells also toured this in the US. The ballet was later produced by the Borovansky Ballet in 1954, Covent Garden in 1959, National Ballet of Canada in 1959, the Joffrey Ballet at City Center in New York Cilty in 1970, Noverre Ballet in 1972 and Oslo Ballet in 1975. In recent years, the ballet has fallen out of the professional ballet repertory in the US, although there was a revival in 2004 by Spectrum Dance Theater of Seattle, with new choreography by Donald Byrd, and it is it is sometimes played as an orchestral piece. The ballet is occasionally produced by amateur groups. In the UK, it remains in the repertoire of the Birmingham Royal Ballet, with a run of performances in 2006 and 2007 and a tour, including to Sadler’s Wells Theatre, in 2011.

The score, or excerpts from it, has been recorded at least seven times, including four performances conducted by Mackerras himself. Gervase Hughes wrote, “Although the orchestration is disfigured by over-reliance on glissando harps and succulent counter-subjects for the horns, much of the music comes over well in its new guise, and the combination of a melody from the opening chorus of Patience with the second act quintet from The Gondoliers is quite brilliant.” A black-and-white studio film of Pineapple Poll, danced by the Royal Ballet, with the London Symphony Orchestra conducted by Mackerras, was broadcast by BBC television in 1959. It starred Merle Park, David Blair and Stanley Holden. A DVD of this film was released in 2011 (also including The Lady and the Fool). A review in Musicweb International commented, “As a score, [Pineapple Poll] quite simply sparkles like freshly popped champagne. … In fact, this is a comic masterpiece. Any viewer will be impressed with the vivacious dancing and the ‘built in’ humour which pervades the work … would that it had been in colour! The costumes look as if they would have been absolutely magnificent. … [T]he studio-based performance means that there is a distinct lack of the atmosphere that an audience would have provided.” Medici.tv also broadcast this film in 2011.