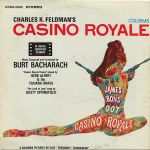 More of the Music of Burt Bacharach

Reviews and Commentaries for the Music of Burt Bacharach

This is a record that has its share of problems, but if you’ve got the system for it (huge, heavily tweaked, fast, free from obvious colorations and capable of tremendous resolution), the best pressings are sure to impress.

Having heard the best sounding pressings I now understand why this has been such a highly regarded long-term resident of the TAS Superdisc List. The best copies are SUPERDISCS… while the average copy of this album is anything but. Who could take such harsh, grainy, thin, veiled, compressed sound seriously? What was Harry Pearson smokin’?

I can honestly and truthfully say that until we discovered the Hot Stampers for this album, I never thought this record deserved the praise Harry heaped upon it. Now I do. I once was blind but now I see, or something like that.

And by the way, does his copy sound as good as this one? Let’s face it: the late Harry Pearson was simply not the kind of guy who would sit down with five or ten copies and shoot them out.

When you listen to the average pressing of Casino Royale, you get the feeling that you’re hearing a standard-issue, boxy, lightweight, blary ’60s soundtrack. Perhaps you hear some promise in the recording, but it’s a promise that’s unfulfilled by the record on your turntable. This copy will completely redefine what you know about the sound of this music.

The space is big and the sound relatively rich (although the sound does vary quite a bit from track to track). The vocals have notably less hardness than most and the orchestra is not as brash as it can be on so many of the copies we audition. Huge amounts of Tubey Magic as well, which is key to the best sounding copies, and critical to The Look of Love.

The sound needs weight, warmth and tubes or you might as well be playing a CD.

A word of caution: Unless your system is firing on all cylinders, even our hottest Hot Stamper copies — the Super Hot and White Hot pressings with the biggest, most dynamic, clearest, and least distorted sound — can have problems . Your system should be thoroughly warmed up, your electricity should be clean and cooking, you’ve got to be using the right room treatments, and we also highly recommend using a demagnetizer such as the the Walker Talisman on the record, your cables (power, interconnect and speaker) as well as the individual drivers of your speakers.

On the Difficulty of Reproduction scale, this record scores fairly high. You need lots of tubey magic and freedom from distortion, the kind of sound I rarely hear on any but the most heavily tweaked systems. The kind of systems that guys like me have been slaving over for thirty years.

If you’re a Weekend Warrior when it comes to stereo, this is not the record for you.

If you have the kind of big system that a record like this demands, when you drop the needle on the best of our Hot Stamper pressings, you are going to hear some amazing sound.