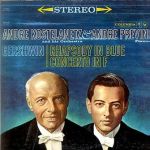 I’ve always loved these performances, but the crude, smeary and painfully-shrill-at-louder-levels Columbia sound quality had always been a powerful barrier to my enjoyment of them.

So many copies suffer from upper-midrangy, glary, hard sound and blary brass. I had come to accept that this is nothing more nor less than “The Sound of Columbia Classical.” As a consequence we rarely put much effort into cleaning and testing their vintage pressings; the good ones were just too hard to find.

I won’t say all that’s changed; it really hasn’t. The vast majority of Columbia classical pressings are still going to sound more or less as awful as they have in the past.

However, there are properly mastered pressings of this album that display little of the “Columbia sound” we describe above. They would obviously be the ones that would do well in our shootouts, as long as they are not too thin, bright and modern sounding.

There was a time when we thought the Red Label Seventies pressings were the best way to hear these performances. This time around that was not the case, as none of them had the heft and Tubey Magical strings and brass of our best early pressings.

Nothing could touch this amazing sounding Six Eye pressing.

Nothing could touch the Six Eye pressing of the Bernstein recording we played either, for what that’s worth.

Finally, the sound we’ve been searching for – rich, tubey and real, with nicely textured strings. The piano is solid, rich, high-rez and percussive — there is hardly any Old School smear or hardness to be heard, always important to the proper reproduction of any piano recording, whether the music is jazz, classical or rock. (We talk about smeary, hard pianos on many of our listings for those of you who take the time to read them.)

Here is the kind of Tubey Magical Midrange that modern records rarely even BEGIN to reproduce. Folks, that sound is gone and it sure isn’t showing signs of coming back. If you love hearing INTO a recording, actually being able to “see” the performers, and feeling as if you are sitting in the studio with the orchestra, this is the record for you. It’s what vintage all analog recordings are known for — this sound.

What the best sides of Previn’s recording of the Concerto in F and Rhapsody in Blue have to offer is not hard to hear:

Just what type of musical creature is the Rhapsody in Blue? From the very outset, commentators have struggled to describe it. Maurice Abravanel and the Utah Symphony play the Rhapsody in Blue – Westminster LP album cover Gershwin had declared his intention as breaking down misconceptions about the limitations of jazz.

But such terminology is confusing – this wasn’t the same spontaneously improvised “jazz” that his contemporaries Louis Armstrong, Jellyroll Morton and Bix Biederbecke were creating. Rather, it was a mainstream version filtered into dance arrangements that stretched conventional rules with a novel edge of some harmonic flights, rhythmic variation and emphatic playing. Whiteman’s claim to have been “The King of Jazz” must have gotten a good sneer from real jazz musicians.

Far more cogent is John Struble’s observation that Gershwin approached all music as a songwriter. His strength was as one of the great instinctive melodists of all time. Although he did receive some formal musical training, his abiding weakness was structure.

Thus, notwithstanding a great love for the piece, Leonard Bernstein disparaged the Rhapsody in Blue as “not a composition at all [but] a string of … terrific tunes … stuck together with a thin paste of flour and water.” Arthur Schwartz agreed, calling the development and transitions “more intuition than tuition.”

All Gershwin’s works discount traditional development and proceed linearly from one event to the next. The appealing result, as Alex North observed, is a natural, sincere expression which, as James Lyons noted, manifests the confidence and nervous energy of the “Roaring Twenties.”

Perhaps the most reliable measure of the Rhapsody’s originality is that it had no direct descendants. Indeed, subsequent attempts to meld pop and serious music always seem awkward. Yet, its fame and impact inspired many serious composers, including Ravel, Stravinsky and Milhaud, to explore jazz and stirred countless pop composers to dabble in classical forms.

Gershwin’s melding of the classical and popular was beautifully summed up by the composer and Gershwin biographer David Schiff in an article, Misunderstanding Gershwin, written for the Atlantic Monthly in 1998, from which the following:

In Gershwin’s music the classical element is minutely stylized, not the popular. The piano concerto, for instance, begins with a percussion fanfare that has little to do with the rest of the work but is a saucy send-up of classical pretensions, as is the elaborate faux fugue that surfaces (and vanishes) in the final movement.

Although Gershwin’s stylization of the classics was most often based on Liszt and Tchaikovsky, he kept abreast of contemporary developments, and turned them to his own purposes. In An American in Paris he showed that even without studying with [Nadia] Boulanger he could imitate the insouciance of Les Six – the group of young composers who were all the rage in Paris – and make use of polytonal harmonies out of Stravinsky, while writing tunes that were memorable and completely Gershwinesque.

And in Variations on ‘I Got Rhythm’ he conspicuously deployed Schoenberg’s twelve-tone method in one variation. Gershwin’s use of these classical devices was not inept and half-baked, as his critics claimed; these sly, knowing trivializations opened a dialogue between classical and popular elements in which the popular side – those gorgeous tunes – would dominate.”

Perhaps the most remarkable appreciation came in 1938 as a posthumous tribute from none other than Arnold Schoenberg, arguably the most influential composer of the twentieth century, but whose rigid formal esthetics were diametrically opposed to Gershwin’s free-flowing inspiration:

Gershwin is an artist and a composer – he expressed musical ideas, and they were new, as is the way he expressed them. … An artist is to me like an apple tree. When the time comes, whether it wants to or not it bursts into bloom and starts to produce apples. … Serious or not, he is a composer, that is, a man who lives in music and expresses everything, serious or not, sound or superficial, by means of music, because it is his native language. … What he has done with rhythm, harmony and melody is not merely style. It is fundamentally different from the mannerism of many a serious composer [who writes] a superficial union of devices applied to a minimum of ideas. … The impression is of an improvisation with all the merits and shortcomings appertaining to this kind of production. … He only feels he has something to say and he says it.