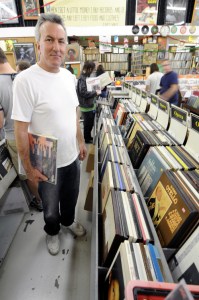 Writing for Dangerous Minds, Richard Metzger recounts his journey though the world of audiophile equipment and his lifelong search for better sounding pressings of his favorite albums.

The first paragraph had me hooked:

Sorry, but this is not going to be one of those analog vs. digital rants that goofball audiophile types like to indulge in at the drop of a hat. In fact I probably should have just called it something like “Why you should never buy new vinyl versions of classic albums.”

Seems pretty clear he knows what he is talking about. Later on he adds this bit:

Nothing trumps empirically comparing a stack of different pressings of the same album in a shootout. This is why you should take what Tom Port of Better Records has to say very seriously. Whether or not you’re willing to pay his Hot Stamper prices, Port probably knows more about records than anyone on Earth and his On The Record blog is one of the very best repositories of hard won empirical evidence relating to audiophile vinyl that’s out there. It might take weeks to read everything, but it’s quite an education.

I couldn’t agree more. The whole story can be found here. I suspect that if you have spent any length of time on this blog, you will get a lot out of it.

I hope to add a few comments of my own down the road, especially in the form of rebuttals to uncharacteristically bad advice such as this:

Michael Fremer’s Analog Planet website is a great resource for finding out about new and upcoming quality vinyl releases. He is one of the most knowledgeable people in the world when it comes to vinyl and he’s also produced a handy YouTube guide to AAA mastered new vinyl releases that you should definitely watch.

I guess it makes sense to play nice with the heavy hitters in the audiophile world. Seriously though, Fremer is the last person that anyone should take advice from. He may be one step ahead of the audiophiles who follow him, but that doesn’t mean he can tell a good record from a bad one. I have been reading him off and on (mostly off) for twenty five years and I see no evidence that he has learned much about records in all those years, or improved his critical listening skills in the slightest.

That fact that this list of crap vinyl is still to be found on his site, with neither corrections nor apologies, should tell you that he never had a clue and is not likely to come into possession of one any time soon

I have a section devoted to Reviewer Malpractice which contains a goodly portion of quotes from this so-called expert. Any attempt to correct the positive things Fremer has written for the kind of third-rate records he tends to review would quickly turn into a full time job. I might even have to hire an assistant.

If Fremer recommends a Heavy Vinyl reissue that we have a corresponding Hot Stamper pressing of, there is not a chance in the world that our record won’t beat the pants off his for sound quality. He has opinions, most of which are way off the mark. We have better sounding records, so good they are guaranteed to beat any other copy you have ever heard or you get your money back.

We have to be right, or we wouldn’t still be in business, owing in large part to the fact that we sell records for ten times as much money as the ones he recommends. He has never had to pay a price for getting the sound of record after record wrong.

The only people that suffer for his mistakes are the credulous audiophiles who bought the mediocre-at-best Heavy Vinyl pressings he’s been promoting for years and are now stuck with. They have a collection of junk vinyl he recommended to them and few of them will ever know something better exists because they think they already have the best.

As Richard goes out of his way again and again to make clear in his piece, empirically comparing pressings is the only way to learn anything of real value when it comes to the sound of record pressings. If you own any Heavy Vinyl LP, it would be my honor to send you the vintage pressing that will help you to hear everything that’s wrong with the sound of it.

It’s what we do. That’s why the business is called Better Records. And we’re still here because we actually do sell the best sounding records in the world. You don’t need to believe a single word of what we say about records, ours or anybody else’s. You just need to put one of our Hot Stampers on your turntable and play it.

Hundreds of audiophiles have done just that and they seem to be pretty darn pleased with the records we’ve sent them.

Want to know more about Hot Stampers? Check out our new introductory page.