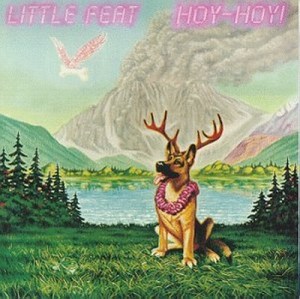 This is one of the all time TOP Little Feat albums and a longtime personal favorite, but it takes a pressing like this to bring it to life.

As we said last time around, there is not a rock album on the The Absolute Sound’s Super Disc List that can hold a candle to the real Rock and Roll Power of a pressing such as this. It’s really not fair to judge the Harry’s List by records like this, which have never been the man’s forte. We, on the other hand, know these kinds of records about as well as anyone, and to prove it we would love to send you this copy. The AMAZING sound is guaranteed to blow your mind.

This is some of the best High-Production-Value rock music of the ’70s. The amount of effort that went into the recording of many of these tracks is comparable to that expended by the engineers and producers of bands like Supertramp, The Who, Jethro Tull, Ambrosia, Pink Floyd and far too many of our favorites to list. It seems that no effort or cost was spared in making the home listening experience as compelling as the recording technology of the day permitted.

The sides that had sound that jumped out of the speakers, with driving rhythmic energy, worked the best for us. They really brought this complex music to life and allowed us to enjoy the hell out of it. This is yet another definition of a Hot Stamper — it’s the copy where the music works as music.

Not a Studio Band

Side four has a live version of the song Two Trains, another one of their best recordings, followed by China White, the story of Lowell’s feelings toward cocaine. Dead at 33, rock and roll lost a giant when drugs brought him low.

This track has all of the best qualities of the MOFI Waiting for Columbus AND MORE! Since the MOFI is one of my all time favorites pressings, how, you ask, can this be better?

More dynamics and energy too. This is truly a Demo Disc track, with that live-in-your-livingroom rock and roll sound we love here at Better Records. Turn it up, the louder the better. The recording is so clean and the best pressings so free from distortion that you can go as loud as your system and your neighbors will let you.

Ditto the above. Both these tracks are worth the price of the album and rank with the best work the band ever did.

A MONSTER SIZED Demo Disc track; the sound is as BIG and BOLD as any rock song on the planet. This bad boy is easily one of the Top Five Feat songs ever recorded — and it would never have made it to any album if Lowell’s wife hadn’t found the tape in a bag in the back of the garage.

Hank Williams’ tale of a boy who broke his darlin’s heart and headed for a chain gang puts you in his shoes in a way that few songwriters can claim. And the production! The drums and bass are HUGE! How can this unknown, all-but-forgotten record sound this good, better than 99% of the stuff out there? What do these guys know that others don’t?

A classic by Lieber and Stoller. One of the most fun tracks Little Feat ever recorded; ya gotta love this one.

With Massenburg at the helm, a man whose work tends to be somewhat on the hi-fi-ish side, I’m shocked at how good this track sounds. If it reminds you of Gaucho-era Steely Dan, complete with breathy female background vocals and a gorgeous sax solo, courtesy of David Sanborn, who plays on both albums (and sounds here a whole lot like Michael Brecker), don’t be surprised — it’s pretty obviously working from their model, and I’m tempted to say the student has become the master. This song is even bigger and bolder in most respects than the best Gauchos. For sophisticated pop production, this is As Good As It Gets. My hat’s off to George M. He knocked this one out of the park. (And it’s even better on the EP!)

Another MONSTER SIZED Demo Disc track; like Lonesome Whistle, the sound is as BIG and BOLD as any rock song on the planet.

This one boast Demo Disc sound of a different style, with a huge group of backing singers behind Lowell, and everybody pulling out the stops, raising the roof as the old gospel phrase has it. Super sweet, wall to wall and practically zero distortion – -play me a CD that sounds like this track and I will eat it.

All That You Dream Track Commentary

Another favorite track, here covered by Linda Ronstadt. She rips it up pretty good; with the aid of some other females, she can let loose knowing that they’ve got her back.

Filled with live performances, obscurities, album tracks, and a new song apiece from Bill Payne and Paul Barrere, Hoy Hoy is a bit scattered, a bit incoherent, a little bewildering, and wholly delightful — a perfect summation of a group filled with quirks, character, and funk, traits which were as much a blessing as they were a curse.

Hoy Hoy! is the name of a Little Feat collection released in 1981 two years after the band’s break-up following the death of founder Lowell George. Originally released as a double album and later a single CD, it contains alternate versions and live recordings of many Feat tracks as well as some previously unreleased material.

‘New’ tracks are as follows:

“Lonesome Whistle” – the old Hank Williams track.
“Gringo” – a Bill Payne track now frequently performed live by Little Feat since their 1988 reunion. This 1981 recording features David Sanborn on saxophone and Nicolette Larson on backing vocals.
“Over The Edge” – a Paul Barrere track recorded in 1981 for a movie made by his brother
“Framed” – an obscure Leiber and Stoller track, covered here by the original four-piece line-up of Little Feat
“China White” – a Lowell George demo from the early 70s featuring among others Jim Keltner (drums) David Foster (piano) and guitar work by Fred Tackett (who would later join Little Feat when they reformed in 1988).

Three of the live numbers (“Skin It Back”, “Red Streamliner” and “Teenage Nervous Breakdown”) were recorded in August 1977 at the Lisner Auditorium in Washington DC for the live Waiting For Columbus album.

The performance of “Red Streamliner” features Michael McDonald and Patrick Simmons of the Doobie Brothers on backing vocals. “The Fan” was recorded live at Ultrasonic Studios in Hempstead, New York on September 19, 1974.