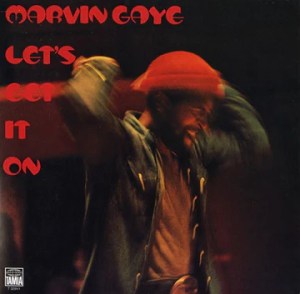 It’s surprising how good some of the classic soul albums from the early ’70s can sound. Let’s Get It On is up there with Stevie Wonder’s Innervisions as albums that offer sound every bit as good as the music.

We had a big stack of copies (it took us ages to pull so many together) and many of them left us cold. When I’m listening to music this important, I don’t want to miss a thing. On the best copies, it was a truly special experience to hear Gaye’s music sound so good.

This vintage Tamla pressing has the kind of Tubey Magical Midrange that modern records can barely BEGIN to reproduce. Folks, that sound is gone and it sure isn’t showing signs of coming back. If you love hearing INTO a recording, actually being able to “see” the performers, and feeling as if you are sitting in the studio with the band, this is the record for you. It’s what vintage all analog recordings are known for — this sound.

What We’re Listening For on Let’s Get It On

After brilliantly surveying the social, political, and spiritual landscape with What’s Going On, Marvin Gaye turned to more intimate matters with Let’s Get It On, a record unparalleled in its sheer sensuality and carnal energy. Always a sexually charged performer, Gaye’s passions reach their boiling point on tracks like the magnificent title hit (a number one smash) and “You Sure Love to Ball”; silky and shimmering, the music is seductive in the most literal sense, its fluid grooves so perfectly designed for romance as to border on parody.