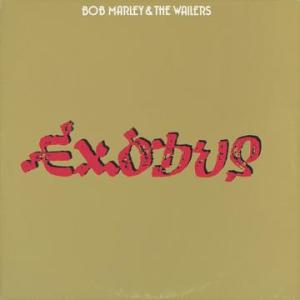 This original Island British pressing has the kind of Tubey Magical Midrange that modern records can barely BEGIN to reproduce. Folks, that sound is gone and it sure isn’t showing signs of coming back. If you love hearing INTO a recording, actually being able to “see” the performers, and feeling as if you are sitting in the studio with the band, this is the record for you. It’s what vintage all analog recordings are known for — this sound.

What We’re Listening For on Exodus

Natural Mystic
So Much Things To Say
Guiltiness
The Heathen
Exodus

After the success of 1974’s Natty Dread and 1976’s Rastaman Vibration, Bob Marley was not only the most successful reggae musician in the world, he was one of the most powerful men in Jamaica. Powerful enough, in fact, that he was shot by gunmen who broke into his home in December 1976, days before he was to play a massive free concert intended to ease tensions days before a contentious election for Jamaican Prime Minister. In the wake of the assassination attempt, Marley and his band left Jamaica and settled in London for two years, where he recorded 1977’s Exodus.

Thematically, Exodus represented a subtle but significant shift for Marley; while he continued to speak out against political corruption and for freedom and equality for Third World people, his lyrics dealt less with specifics and more with generalities and the need for peace and love (though “So Much Things to Say,” “Guiltiness,” and “The Heathen” demonstrate the bullets had taken only so much sting out of Marley’s lyrics). And while songs like “Exodus” and “One Love/People Get Ready” were anthemic, they also had less to say than the more pointed material from Marley’s earlier albums. However, if Marley had become more wary in his point of view (and not without good cause), his skill as a songwriter was as strong as ever, and Exodus boasted more than a few classics, including the title song, “Three Little Birds,” “Waiting in Vain,” and “Turn Your Lights Down Low,” tunes that defined Marley’s gift for sounding laid-back and incisive at once.

His gifts as a vocalist were near their peak on these sessions, bringing a broad range of emotional color to his performances, and this lineup of the Wailers — anchored by bassist Aston “Family Man” Barrett, drummer Carlton Barrett, and guitarist Julian “Junior” Murvin — is superb, effortlessly in the pocket throughout. Exodus was recorded at a time when Bob Marley was learning about the unexpected costs of international stardom, but it hadn’t yet sapped his creative strengths, and this is one of the finest albums in his stellar catalog.