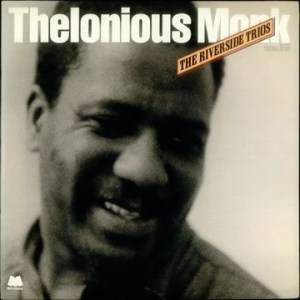 This vintage Milestone pressing has the kind of Tubey Magical Midrange that modern records can barely BEGIN to reproduce. Folks, that sound is gone and it sure isn’t showing signs of coming back. If you love hearing INTO a recording, actually being able to “see” the performers, and feeling as if you are sitting in the studio with the band, this is the record for you. It’s what vintage all analog recordings are known for — this sound.

What the best sides of The Riverside Trios have to offer is not hard to hear:

What We’re Listening For on The Riverside Trios

Liza
Memories Of You
Honeysuckle Rose
Darn That Dream

Tea For Two
You Are Too Beautiful
Just You, Just Me

When Thelonious Monk first signed with Riverside Records in 1955, producer Orrin Keepnews thought that it would be a good idea for the unrecognized giant to record an album of Duke Ellington compositions and follow it up with a set of standards so as to discount his eccentric and forbidding image. The results were quite satisfying, trio performances with bassist Oscar Pettiford and either Kenny Clarke or Art Blakey on drums that made Monk’s playing seem more accessible to the regular jazz audience without watering down his style. This two-LP set contains both albums (the program of Ellington’s music is particularly unique) and is very enjoyable.