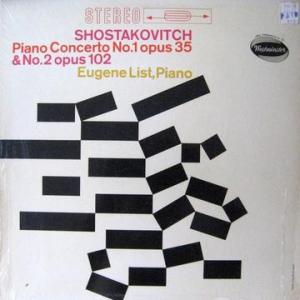 This vintage Westminster pressing has the kind of Tubey Magical Midrange that modern records can barely BEGIN to reproduce. Folks, that sound is gone and it sure isn’t showing signs of coming back. If you love hearing INTO a recording, actually being able to “see” the performers, and feeling as if you are sitting in the studio with the band, this is the record for you. It’s what vintage all analog recordings are known for —this sound.

The piano is part of the orchestra, and properly sized, allowing the contributions of the other musicians in the orchestra to be heard more clearly, laid out as they are so elegantly across a huge and deep stage.

In orchestral music, when it comes to clarity there is nothing close to the sound of the live performance, but some records, this one especially, give you the sense that you are hearing it all. Audio is purely an illusion but it can be a very convincing one.

The spaciousness and three-dimensionality of the recording is also exceptional. Through the efforts and skill of the engineers, that striking openness in the recording is somehow combined with an electrifying immediacy in the sound of the piano, no mean feat. One rarely hears both, except of course live (and not always even then).

There may be other performances of merit, but I know of no recording of this music with better sound. If you are demonstrating naturalistic sound, not bombastic Hi-Fi Spectacularity, this pressing more than qualifies as a DEMO DISC.

What typically separates the killer copies from the merely good ones are qualities that we often look for in the records we play: transparency. Transparency allows you to hear into the recording, reproducing the ambience and subtle musical cues and details that high-resolution analog is known for. (Note that most Heavy Vinyl pressings being produced these days seem to be seriously Transparency Challenged. Lots of important musical information — the kind we hear on even second-rate standard-weight pressings — is simply not to be found.)

Solid weighty sound for a piano concerto recording is critically important as well. The piano has to be big, powerful, and solid and massive as a boulder, just the way it can be in the concert hall.

The piano is so clear, yet the orchestra is as rich and smooth as one could possibly ask for. No smear, no congestion, no bandwidth limitations – this is the sound of the master tape. No modern reissue — digital or analog — will ever be able to reproduce more than a fraction of the sound found on this pressing.

What We’re Listening For on This Superb Classical Release

Wikipedia on Piano Concerto No. 1

The Concerto in C minor for Piano, Trumpet, and String Orchestra, Op. 35, was completed by Dmitri Shostakovich in 1933. The concerto was an experimentation with a neo-baroque combination of instruments.

The concerto was premiered on 15 October 1933 in the season opening concerts of the Leningrad Philharmonic Orchestra with Shostakovich at the piano, Fritz Stiedry conducting, and Alexander Schmidt playing the trumpet solos. “By all accounts, Shostakovich played brilliantly” and the concerto was well received. The performance was repeated on 17 October.

Despite the title, the work might more accurately be classified as a double concerto rather than a piano concerto in which the trumpet and piano command equal prominence. The trumpet parts frequently take the form of sardonic interjections, leavening the humor and wit of the piano passage work. The trumpet does assume relatively equal importance during the conclusion of the last movement, immediately after the cadenza for piano solo. Years after he wrote the work, Shostakovich recalled that he had initially planned to write a concerto for trumpet and orchestra and then added the piano to make it a double concerto. As he continued writing, it became a piano concerto with a solo trumpet.

Wikipedia on Piano Concerto No. 2

Piano Concerto No. 2 in F major, Op. 102, by Dmitri Shostakovich was composed in 1957 for his son Maxim’s 19th birthday. Maxim became a famous conductor. Maxim premiered the piece during his graduation at the Moscow Conservatory. This piano concerto was intended to be the last piece he wrote for piano. It contains many similar elements to his other composition, Concertino for Two Pianos. They were both written to be accessible for developing young pianists. It is an uncharacteristically cheerful piece, much more so than most of Shostakovich’s works.

The first movement is in sonata form. The jolly main theme of the first movement is played first by the bassoon, then soon accompanied by the clarinets and oboes. The piano enters unobtrusively with an answering theme, played as single notes in both hands an octave apart. This evolves into a march-like theme. A new melodic theme in D minor is then introduced, with unisons two octaves apart on the piano, winding down to nothing. Then, an abrupt blast from the orchestra leads into tumultuous and low jumping octaves on the lower piano, while the orchestra plays a variation on the original piano melody fortissimo. The piano builds in a triplet pattern to introduce the D minor theme (now in Bb major) in an augmentation in a triumphant tutti. At the climax, everything comes to a silent pause, and the piano comes in with a fugue-like counterpoint solo. After a minute of the fugue, the orchestra comes back in, playing the melody in the high winds. The orchestra builds on the main melody while the piano plays scales and tremolos, which lead into a joyous few lines of chords and octaves by the piano, with the main theme finally resurfacing and bringing the movement to a close.

The second movement is subdued and romantic. It presents two different themes that are in variation form. The mood can be considered tender with a touch of melancholy. Strings start gently in C minor, with a short introduction before the piano comes in with a gentle triplet theme in C major.This type of rhythm is also found in his other compositions such as the Prelude in C major Op. 87 No. 1. Although it remains slow throughout, and works within a comparatively small range, it is marked by the recurrence of two- or four-on-three rhythms.

The finale is a lively dance in duple time, making much use of pentatonic scales and modes. Soon, the second theme is introduced, in 7/8 time, with the piano accompanied by balalaika-like pizzicato strings. It gives an impression of what parades and processions were like in the Soviet Era. This carries on for a short time before a new motif arrives in “Hanon” exercise mode, with scales in sixths and semiquaver runs, this being the joke for Maxim’s graduation. These three themes are then developed and interwoven before a final statement of the 7 8 theme and finally a virtuoso coda in F major.