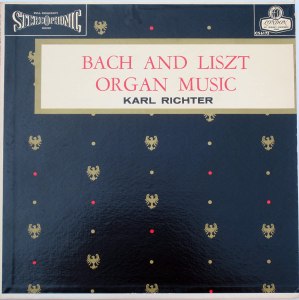 For those of you who think technology marches on — which of course it does in some ways — this 1956 recording shows that they could capture the authentic sound of the real instrument with the equipment of the day. Maybe they could even capture it better back in those days. I certainly can’t think of a better organ record than this, and musically I don’t think there are too many organists in Richter’s class.

This vintage London pressing has the kind of Tubey Magical Midrange that modern records can barely BEGIN to reproduce. Folks, that sound is gone and it sure isn’t showing signs of coming back. If you love hearing INTO a recording, actually being able to “see” the performance, and feeling as if you are listening live in Geneva’s Victoria Hall, this is the record for you. It’s what vintage all analog recordings are known for — this sound.

The German organist, harpsichordist and conductor, Karl Richter, studied with Rudolf Mauersberger, Karl Straube and Günther Ramin in Leipzig and received his degree in 1949. In the same year, he was appointed organist of St. Thomas Church in Leipzig.

In 1951, Karl Richter started teaching at the Conservatory of music in Munich. He later had a professorship there and was cantor and organist at St. Mark’s Church.

During his first year in Munich, Karl Richter became conductor of the ‘Heinrich-Schütz-Kreis’, which had been founded at the end of World War II, and renamed it Münchener Bach-Chor (Munich Bach Choir) in 1954. Together with his newly established Bach Orchestra, Richter and the ensemble gave numerous concerts in Munich and performed regularly at the Bach-Tage Ansbach (Bach Days) until 1964. Within a short time, Karl Richter successfully used ‘his’ choir to make Bavaria a second home for the Leipzig musical tradition. According to the encyclopaedia ‘Music in Geschichte und Gegenwart’ (Music in the Past and Present), Protestant church music is indebted to the organist of St. Mark’s Karl Richter for his ‘exemplary work with Bach’s music’, which has been an important part of the musical life in Munich – ‘apart from the church as well’. This was a clear reference to the Munich Bach Choir’s achievements on the occasion of the 1959 Protestant Church Convention in Munich.

The sixties and the seventies were dominated by recordings and tours abroad that took the choir to USA, the Soviet Union, Japan and South America. The choir became internationally renowned at the same Karl Richter was acclaimed for his interpretations of J.S. Bach’s music, both as solo harpsichordist and accompanist.

In February 1981, Karl Richter died of a heart attack at the age of 54. It was a sudden end to his work with the Münchener Bach-Chor, which had lasted almost 30 years. The choir was said to be Karl Richter’s true instrument in many obituaries.

Today (1992), the Münchener Bach-Chor is conducted by Hanns-Martin Schneidt and is still an important part of the concert life in Munich.