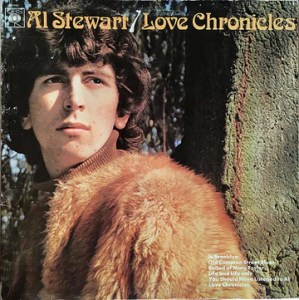 This vintage CBS import pressing has the kind of Tubey Magical Midrange that modern records can barely BEGIN to reproduce. Folks, that sound is gone and it sure isn’t showing signs of coming back. If you love hearing INTO a recording, actually being able to “see” the performers, and feeling as if you are sitting in the studio with the band, this is the record for you. It’s what vintage all analog recordings are known for — this sound.

What We’re Listening For on Love Chronicles

You Should Have Listened To Al
Love Chronicles

Al Stewart’s second album is most renowned for the 18-minute title track, an autobiographical recount of different love affairs with guitar by Jimmy Page. That track was also quite controversial for its day in its use of the word “f*cking” at one point in the lyrics, though that’s not typical of the tone of the composition. It’s actually not the best of the six songs on the record, which saw Stewart wisely discard the orchestration of his debut in favor of fairly straight-ahead folk-rock backing.

“Ballad of Mary Foster” is Stewart’s best early song, as a two-part suite neatly divided between brusque cynical commentary on a bourgeois English family and the introspective musings of the ravaged wife. That second part bears considerable similarity in melody and tempo, incidentally, to sections of the far more famous Stewart song “Roads to Moscow.” The rest of the album has additional solid vignettes in the standard gentle yet detached Stewart mold, the best of them being “Life and Life Only,” which exploits his knack for insistent, repetitive minor-keyed hooks.