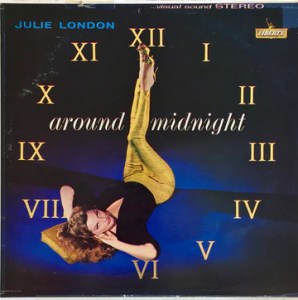 What We’re Listening For on Around Midnight

In 1960, pop vocalist Julie London was really cranking out albums for the successful label Liberty Records. The success of her 1955 hit “Cry Me a River” put Liberty into overdrive and London responded by making some of the strongest records of her career. Her ability to interpret a song was at its strongest in the late ’50s and early ’60s, as is evidenced on the shimmering Around Midnight. While some of her best recordings were in front of small jazz combos, Around Midnight proves that London was just as effective in front of larger orchestras and bands. The drowsy “Black Coffee” and lazy “Lush Life” typify the late-night feel of the album, leading right into “The Wee Small Hours of the Morning.”