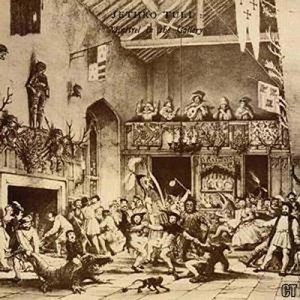 This original British Chrysalis copy has two excellent sides, with ROCK ENERGY and power that few other copies could compete with. This copy gets BIG when it needs to (the proggy parts), and that makes it fun.

Plenty of Tubey Magic is on offer as well, with rich, sweet acoustic guitars and a lovely freedom from hi-fi-ishness on the vocals. As you probably know, Ian Anderson can get a little carried away with the processing on his voice, but the best copies make that processing sound right within the context of the overall sound. Most copies have added distortion and grit on the vocal effects, making them much less pleasing to the ear than the engineers envisioned.

Space is critical to the success of the dense mixes employed in the proggy parts of the recording. The best copies have room for all the instruments to separate themselves out. Just to take one example: the drums are everywhere: higher, lower, in the front, in the back; in short, all over the place, and there’s no doubt in our minds that they were meant to be heard that way, not congested, blurred and smeared together on a single plane as they were on many of the copies we played.

And not thinned out either, which is not so much about space but sure is important on a rock record.

One White Duck/0=Nothing at All
Baker St. Muse
Grace

Minstrel in the Gallery was Tull’s most artistically successful and elaborately produced album since Thick As a Brick and harkened back to that album with the inclusion of a 17-minute extended piece (“Baker Street Muse”). Although English folk elements abound, this is really a hard rock showcase on a par with — and perhaps even more aggressive than — anything on Aqualung.

In 1975, the band released Minstrel in the Gallery, an album which resembled Aqualung in that it contrasted softer, acoustic-guitar-based pieces with lengthier, more bombastic works headlined by Barre’s electric guitar. Written and recorded during Anderson’s divorce from his first wife Jennie Franks, the album is characterised by introspective, cynical, and sometimes bitter lyrics. Critics gave it mixed reviews, but the album came to be acknowledged as one of the band’s best by longtime Jethro Tull fans,[citation needed] even as it generally fell under the radar to listeners familiar only with Aqualung.