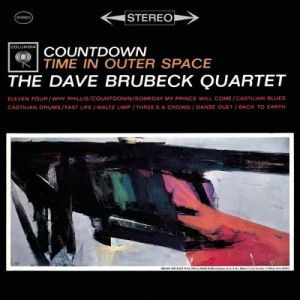 Need a refresher course in Tubey Magic after playing too many modern recordings or remasterings? These vintage Brubeck recordings are overflowing with it. Rich, smooth, sweet, full of ambience, dead-on correct tonality — everything that we listen for in a great record is here.

In addition to the fine qualities outlined above, there was also barely a trace of smear on the piano, which is unusual in our experience for a vintage All Tube recording from 1962, although no one ever seems to talk about smeary pianos in the audiophile world (except for us of course).

Getting The Balance Right

Clean and clear yet rich and sweet, this copy managed to find the perfect balance of these attributes so essential to the sound of vintage jazz recordings. You want to find that rare copy that keeps what is good about a Tubey Magical analog recording from The Golden Age of Jazz while managing to avoid the pitfalls so common to them: smear, lack of top end extension, opacity and blubber.

To be sure, the fault is not with the recording (I assume, not having heard the master tape) but with the typical mediocre pressing. Bad vinyl, bad mastering, who knows why so many copies sound so smeary, thick, dull and veiled?

This copy has no such problems. Full-bodied sound, open and spacious, bursting with life and energy — these are the hallmarks of our Truly Hot Stampers. If your stereo is cookin’ these days this record will be an unparalleled Sonic Treat. We guarantee that no heavy vinyl pressing of any Brubeck album has the kind of analog magic found on one of our Hot Stampers.

What the best pressings of Countdown – Time In Outer Space have to offer is not hard to hear:

What We’re Listening For on Countdown – Time In Outer Space

Frederick “Fred” Plaut was employed by Columbia Records during the 1940s, 1950s, and 1960s, eventually becoming the label’s chief engineer.

It’s not clear whether he recorded the entire album or just the tracks from the same sessions as Time Further Out. Since Time Further Out may just be the best sounding record Brubeck and company ever recorded, whoever the engineer may have been, he did one helluva job!

One of Dave Brubeck’s more adventurous albums, this LP finds his Quartet exploring originals in a variety of potentially difficult time signatures including 11/4 and a polyrhythmic version of the dates’ one standard “Someday My Prince Will Come.” Other highlights include “Countdown,” “Castilian Drums” and “Three’s a Crowd.” Highly recommended along with Brubeck’s other Time recordings.