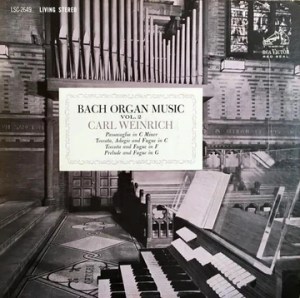 Musically speaking there aren’t many organists in Carl Weinrich’s class. The only other Bach organ records of this caliber that we know of are the two volumes that Karl Richter recorded for Decca in the mid-’50s. You can’t go wrong with any of them. At least one belongs in any serious audiophile’s collection.

This vintage Shaded Dog Living Stereo pressing has the kind of Tubey Magical Midrange that modern records can barely BEGIN to reproduce. Folks, that sound is gone and it sure isn’t showing signs of coming back. If you love hearing INTO a recording, actually being able to “see” the performers, and feeling as if you are sitting in the studio with the band, or in this case sitting in the church seen on the cover, this is the record for you. It’s what vintage all analog recordings are known for — this sound.

What We’re Listening For on Organ Music Volume 2

Other copies — my notes for these copies often read “BIG and BOLD” — create a huge soundfield. They’re not brighter, they’re not more aggressive, they’re not hyped-up in any way, they’re just bigger and clearer.

Think about it: if you had only seven copies, you might not have stumbled upon the copy that sounded so exceptionally open and clear. And how many of even the most dedicated audiophiles would have more than one of two clean vintage pressings with which to do a shootout? These kinds of records are expensive and hard to come by in good shape. Believe us, we know whereof we speak when it comes to getting hold of vintage Living Stereo albums.

When you hear a copy do what this copy can, it’s an entirely different – and dare I say unforgettable — listening experience.