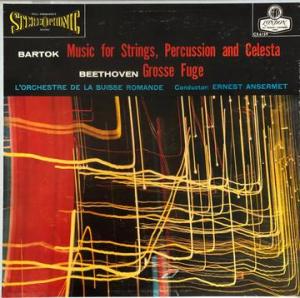 NOTE: our cover does not have the tear in the upper right corner shown in the picture.

James Walker was the producer, Roy Wallace the engineer for these sessions from 1958 in Geneva’s glorious Victoria Hall. Released in 1960, it’s yet another remarkable disc from the Golden Age of Vacuum Tube Recording.

Music for Strings, Percussion and Celesta

Music for Strings, Percussion and Celesta… is one of the best-known compositions by the Hungarian composer Béla Bartók. Commissioned by Paul Sacher to celebrate the tenth anniversary of the chamber orchestra Basler Kammerorchester, the score is dated September 7, 1936.

The work was premiered in Basel, Switzerland on January 21, 1937 by the chamber orchestra conducted by Sacher, and it was published the same year by Universal Edition.

As its title indicates, the piece is written for string instruments (violins, violas, cellos, double basses, and harp), percussion instruments (xylophone, snare drum, cymbals, tam-tam, bass drum, and timpani) and celesta. The ensemble also includes a piano, which may be classified as either a percussion or string instrument (the celesta player also plays piano during 4-hand passages). Bartók divides the strings into two groups which he directs should be placed antiphonally on opposite sides of the stage, and he makes use of antiphonal effects particularly in the second and fourth movements.