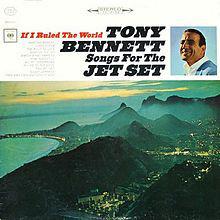 What We’re Listening For on If I Ruled The World

Employing Sinatra arranger Don Costa, Tony Bennett put together a concept album similar to Sinatra’s Come Fly with Me. Travel was the loose theme that united Antonio Carlos Jobim’s “Song of the Jet” (set in Rio de Janeiro, a photograph of which graces the album cover), “Fly Me to the Moon,” and the title song, a Leslie Bricusse-Cyril Ornadel tune from the show Pickwick that was Bennett’s latest hit single. There were also two songs from the Richard Rodgers-Stephen Sondheim musical Do I Hear a Waltz?, which was set in Venice. Other sections might not justify the flight theme — Duke Ellington’s “Love Scene” was given a “destination” of Harlem on the back cover, and that neighborhood is on no known flight plan — but with such high-quality material, it was hard to complain.