More Album Reviews of the Music of Paganini 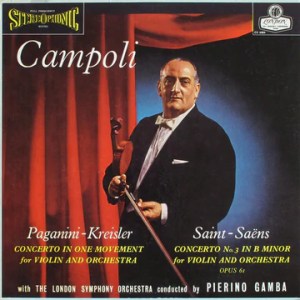 This is a WONDERFUL sounding violin concerto recording. It has TUBEY MAGIC as well as MUSIC to die for. What’s most interesting about the sound is how well the violin is integrated into the orchestra. On most RCAs, just to pick one golden age label to use as an example, the violin is typically hugely oversized and placed far in front of the orchestra. Not so here. The violin is of a whole with the orchestra, which makes for a much more natural and relaxed presentation.

The orchestra is a bit compressed, something engineers of the day were fond of doing. The violin tone however, as well as its dynamic contrasts, are PERFECTION. This is a Decca recording and the keyword here is NATURAL. So musical and involving too. All in all a lovely record.

This vintage London Stereo pressing has the kind of Tubey Magical Midrange that modern records rarely even BEGIN to reproduce. Folks, that sound is gone and it sure isn’t showing signs of coming back. If you love hearing INTO a recording, actually being able to “see” the performers, and feeling as if you are live to The London Symphony, this is the record for you. It’s what vintage all analog recordings are known for — this sound.

What the best sides of this classical delight have to offer is not hard to hear:

This is an excellent record for adjusting tracking weight, VTA, azimuth and the like. Classical music is really the ultimate test for proper turntable/arm/cartridge setup (and evaluation). A huge and powerful recording such as this quickly separates the men from the boys stereo-wise. Recordings of this quality are the reason there are $10,000+ front ends in the first place. You don’t need to spend that kind of money to play this record, but if you do, this is the record that will show you what you got for your hard-earned money.

Ideally you would want to work your setup magic at home with this record, then take it to a friend’s house and see if you can achieve the same results. I’ve done this sort of thing for years. Sadly, not so much anymore; nobody I know can play records like these the way we can. Playing and critically evaluating records all day, every day, year after year, you get pretty good at it. And the more you do it, the easier it gets.

Properly set VTA is especially critical on this record, as it is on most classical recordings. The smallest change will dramatically affect the timbre, texture and harmonic information of the strings, as well as the rest of instruments of the orchestra.

What We’re Listening For on these classical sides

At age seven Kreisler entered the Vienna Conservatory, and from 1885 to 1887 he studied composition and violin at the Paris Conservatory. After a successful concert tour of the United States (1888–89), he returned to Vienna to study medicine. He subsequently studied art in Paris and Rome and served as an officer in the Austrian army. In 1899 he returned to the stage as a concert violinist and became one of the most successful virtuosos of his time.

Kreisler’s technique was characterized by an intensive vibrato and an economy in bowing. In 1910 he gave the first performance of Sir Edward Elgar’s Violin Concerto, dedicated to him. After 1915 he lived mainly in the United States but continued to tour widely in Europe. His concert programs frequently included many short pieces by him, among them “Caprice Viennois” (“Viennese Caprice”) and “Schön Rosmarin” (“Pretty Rosemary”). His Classical Manuscripts, published as his arrangements of works by Antonio Vivaldi, François Couperin, Johann Stamitz, Padre Martini, and others, were admitted in 1935 to be works of his own.

The Italian-born English violinist, Alfredo Campoli (often known simply as Campoli), (born October 30, 1906 – Rome, Italy—died March 27, 1991 – Princes Risborough, Buckinghamshire, England), was born into a musical family. His father was leader of the Orchestra dell’Accademia di Santa Cecilia, taught the violin and was Alfredo’s first teacher. His mother was a dramatic soprano who had toured with Scotti and Caruso, but a retired performer at the time of Campoli’s birth. His family moved to England in 1911, and 5 years later Campoli was already giving public concerts. In 1919 he entered the London Music Festival and won the gold medal for his performance of the Felix Mendelssohn’s Violin Concerto. Campoli made his professional debut in a recital at the Wigmore Hall in 1923. He toured with such singers as Dame Nellie Melba and Dame Clara Butt…

Alfredo Campoli was noted for the beauty of the tone he produced from the violin. He considered the phrasing of each passage he played and if he could achieve ‘bel canto’ by shortening or lengthening a note then he would do so. He was not afraid to lift the bow from the strings, an act that seems to be completely avoided today. Brief breaks of sound can add tremendous drama and power to a performance, even when not indicated by the composer…

This is a WONDERFUL sounding violin concerto recording. It has TUBEY MAGIC as well as MUSIC to die for. What”s most interesting about the sound is how well the violin is integrated into the orchestra. On most RCAs, just to pick one golden age label to use as an example, the violin is typically hugely oversized and placed far in front of the orchestra. Not so here. The violin is of a whole with the orchestra, which makes for a much more natural and relaxed presentation.

The record also features Saint-Saens – Concerto No. 3 in B Minor for Violin and Orchestra.