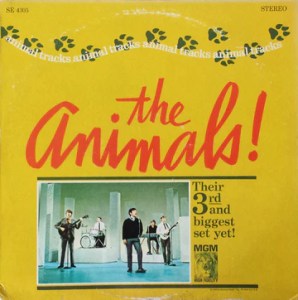 This vintage MGM pressing has the kind of Tubey Magical Midrange that modern records can barely BEGIN to reproduce. Folks, that sound is gone and it sure isn’t showing signs of coming back. If you love hearing INTO a recording, actually being able to “see” the performers, and feeling as if you are sitting in the studio with the band, this is the record for you. It’s what vintage all analog recordings are known for — this sound.

What We’re Listening For on Animal Tracks

In 1965, The Animals released a pair of albums that were each titled Animal Tracks, a May 1965 release in their native UK and a September release in the US. Aside from sharing a title these two records bore little resemblance in either song selections or effective approach. The UK release was filled with fresh recordings of mainly R&B covers, while the US version featured recent hit singles, B-sides along with other recordings previously released in Britain but not in America, making this a fine compilation of the group’s early career.

…The US version of the album featured an eclectic mix of songs recorded and released in the past year with just a few new recordings made in the summer of 1965. The earliest songs on this album date back to the summer of 1964 with the Burdon / Price original “Take It Easy Baby”, a swinging pop B-Side, as well as two tracks from their 1964 self-titled UK debut album, “Bury My Body” and “The Story of Bo Diddley”. “Don’t Let Me Be Misunderstood” was an early 1965 single that was a trans-Atlantic hit as an original rendition of a song originally recorded by Nina Simone. The US version also includes the thumping original B-Side of “Don’t Let Me Be Misunderstood”, “Club A-Go-Go”, and also a soulful cover of Sam Cooke’s “Bring It On Home to Me”.