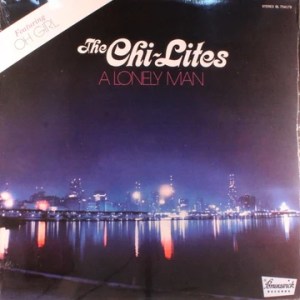 This vintage Brunswick pressing has the kind of Tubey Magical Midrange that modern records can barely BEGIN to reproduce. Folks, that sound is gone and it sure isn’t showing signs of coming back. If you love hearing INTO a recording, actually being able to “see” the performers, and feeling as if you are sitting in the studio with the band, this is the record for you. It’s what vintage all analog recordings are known for — this sound.

What We’re Listening For on A Lonely Man

Behind the talents of Eugene Record, the Chi-Lites presented an impeccable album featuring one gem after another. Not losing any steam from their previous album, the Chi-Lites plugged another number one song, the universally appealing “Oh Girl,” which also claimed the number one spot on the pop charts. “Coldest Days of My Life” came with a placid arrangement and peaked at number eight, and “Lonely Man” was a humble extension of “Have You Seen Her.” From the testimonial “Living in the Footsteps of Another Man” to the mid-tempo “Being in Love” to the ballad “Love Is,” the Chi-Lites were flawless with this effort. Record is masterful with his articulation of the lyric; he stays in control of his vocals. His penmanship is phenomenal and his production skills are irreproachable. The only socially charged number is a remake of the Marvin Gaye classic “Inner City Blues (Make Me Wanna Holler),” and it’s done with skillful execution.