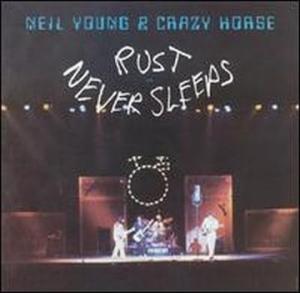 *NOTE: On side one, a light mark makes 5 very light ticks at the end of Track 3, Ride My Llama.

Tubey Magic in 1979? Yes, analog was still alive and well then — this copy proves it. The disastrously synthesized ’80s were on their way but thankfully they hadn’t gotten here yet.

Side two is where the harder-rockin’ electric material can be found, including two of the best songs on the album: Powderfinger and Sedan Delivery.

This vintage pressing has the kind of Tubey Magical Midrange that modern records rarely BEGIN to reproduce. Folks, that sound is gone and it sure isn’t showing signs of coming back. If you love hearing INTO a recording, actually being able to “see” the performers, and feeling as if you are sitting in the studio with the band, this is the record for you. It’s what vintage all analog recordings are known for — this sound.

One of The Better Later Neil Young Albums

This album is (mostly) a live recording with a minimal number of overdubs. Crazy Horse is of course widely recognized as one of the all-time killer concert acts of its day, so it’s a bit of a shame that most of the copies we played this week made us want to go to sleep. The not-so-Hot copies failed in a number of ways: thin guitars or vocals, overly dry or edgy sound, and insufficient presence, just to name a few. It was the rare copy that made us forget we were listening to a record and allowed us to really get into the music.

Needless to say, we had this record playing very very loud. Twenty dB less than it would have been at the live event, sure, at least, but very, very loud for a 18×20 living room in the suburbs.

If you’re a fan, this record absolutely belongs in your collection, along with about ten others by the man. Now, what other solo artist can you name that has ten or more records to his name worth owning? I’m hard-pressed to think of one other than Bob Dylan (and, not being a big Bob Dylan fan, I myself would be quite content with half a dozen, tops). The Beatles and The Stones don’t count, obviously. Elvis Costello comes pretty close, but ten? I can’t get there, with him or anybody else. Neil’s body of work stands alone.

By the way, the CD of Live at Massey Hall 1971 is absolutely amazing, sonically and musically. No Neil Young fan should be without it.

What We’re Listening For on Rust Never Sleeps

My My, Hey Hey (Out of the Blue)
Thrasher
Ride My Llama
Pocahontas
Sail Away

Powderfinger
Welfare Mothers
Sedan Delivery
Hey Hey, My My (Into the Black)

Rust Never Sleeps, its aphoristic title drawn from an intended advertising slogan, was an album of new songs, some of them recorded on Neil Young’s 1978 concert tour. His strongest collection since Tonight’s the Night, its obvious antecedent was Bob Dylan’s Bringing It All Back Home, and, as Dylan did, Young divided his record into acoustic and electric sides while filling his songs with wildly imaginative imagery.

The leadoff track, “My My, Hey Hey (Out of the Blue)” (repeated in an electric version at album’s end as “Hey Hey, My My [Into the Black]” with slightly altered lyrics), is the most concise and knowing description of the entertainment industry ever written; it was followed by “Thrasher,” which describes Young’s parallel artistic quest in an extended metaphor that also reflected the album’s overall theme — the inevitability of deterioration and the challenge of overcoming it.

Young then spent the rest of the album demonstrating that his chief weapons against rusting were his imagination and his daring, creating an archetypal album that encapsulated his many styles on a single disc with great songs — in particular the remarkable “Powderfinger” — unlike any he had written before.