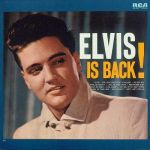 For those who wish to find their own Hot Stamper pressings of the album, we say more power to you. Our helpful advice can be found at the bottom of the listing,

What a great Elvis album. Fever is the killer jam on the first side and the material throughout is of very high quality.

Finding clean real Elvis records — not those crappy compilations and vault-leftovers, but real Elvis albums from his golden period when he was the true King of Pop (sorry Michael) — has never been a walk in the park. We do the best we can.

Fortunately there are some reissues from the ’60s and ’70s that have the potential for excellent sound. This is no doubt one of them. The originals we see are pretty much a lost cause; they’re practically always scratched and full of groove damage. We’d be lucky to find one clean one every five years.

Many copies had edgy, too-hot vocals. The best copies keep the vocals sounding tonally natural even when loud.

Make Me Know It
Fever
The Girl of My Best Friend
I Will Be Home Again
Dirty, Dirty Feeling
The Thrill of Your Love

Although they have common recording origins, two of the three singles, “It’s Now or Never” and “Are You Lonesome Tonight,” were very quirky by the standards of Elvis songs at the time — the former inspired by Elvis’s admiration for Tony Martin’s 1949 hit “There’s No Tomorrow,” while the latter was recorded at the request of Col. Parker as a favor to his wife. They add to the diversity of sounds on this record, which shows a mature Elvis Presley.

“Dirty, Dirty Feeling” and “It Feels So Right” showed he could still rock out and challenge authority and propriety, while “Reconsider Baby” and “Like a Baby” offer some of his best blues performances; but “The Thrill of Your Love” (a very gospel-tinged number), “Soldier Boy,” “Girl of My Best Friend,” and “Girl Next Door Went a’ Walking,” also displayed the rich, deep vocalizing that would challenge critics’ expectations of Elvis Presley playing rhythm guitar throughout.

He also comes off better than on any of his other albums since arriving at RCA, as a musician as much as a “star” (he’d always had a lot more to say about running his sessions than the critics who loathed his RCA years indicated).

Which simply means that the early RCA domestic stereo pressings win the shootouts, in this case without exception.