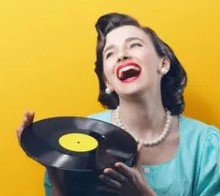 Most the Best Prints of Vinyl Albums Available Now!

Years ago we were contacted by a Russian reporter who wanted to do a story on Better Records and our Hot Stampers. How could we possibly turn down the chance to spread the word to our liberated friends on the other side of the world about these amazing sounding pressings?

Note that the key feature of the article is how high the prices are. This is apparently big news in Russia, yes?

The full newspaper page shows three records, each of which is many hundreds of dollars. Crazy Americans? Maybe so, but we say put that on your revolving object and spin it if you don’t believe these are the most musical records. Y

ou will see that each cent spent for them is justified.

If still one week ago you I am ready to give the sum for well written down vinylic disk, I, perhaps, have stopped on fifty dollars. The price reissue disks in the catalogue of Company Acousticsunds.com is those at the maximum. But in the same catalogue there are disks and on 20 dollars.

Purchase of disks – not cheap pleasure. But who has told, what the illness, known to us as “audiophilia” – for those who wishes to save? What component of a stereosystem take, fluctuations in the price – thousand dollars. It is possible to get a revolving object both for 500 dollars, and for 50 thousand Difference – hundredfold, thus, I assure you, what is also more dear what for, to limit the most valuable component of a stereosystem – the most musical record?

Recently I have learned, that there are records which cost in tens times more expensively. They for elites, and these elites approve, that each cent spent for them is justified.

It is a question of Californian company Better Records which main goods – Hot Stampers, Is a plate which correspond to the highest requirements of sounding.

[words missing in newspaper scan]… a way – to hear to it. You can trust only to the ears, instead of all those advertising labels which today decorate disks for audiophiles.

– Means, you listen to each disk which you then sell as hot-stamper?
– Only so.

– How many at you leaves on it of time?
– It is enough to hear to 10 seconds to define its quality. If it sounds well – we put aside it. Then we listen to it more closely and we estimate according to ours and after a sink [I think this means record cleaning] will be huge. Therefore the machine for a sink of disks also costs thousand dollars!

– You recommend on the website of a revolving object of American company VPI, but at this firm the big list of production. You consider what revolving object optimum at a minimum of expenses?
– The most accessible revolving object in their catalogue Scout. It costs about 2000 dollars, But following model Scoutmaster – already gives much better reproduction. It costs 2500 dollars. We recommend for it disk VPI-Superplatter, … [words missing in newspaper scan]

[words missing in newspaper scan] … you use and recommend the clients?
– We recommend only that well we know. There are hundreds the companies which are letting out electronics, wires, columns. Everyone chooses that is pleasant to it. I do not recommend any amplifiers because from time to time ourselves them we change, we use columns Focus, however the final choice of columns remains for the collector. In our catalogue only those base things for listening vinylic disks with which we use.

– What probability of what, getting modern reprinting of any classical album, I shall receive high quality of a sound?
– Very high probability. Our site you can esteem comments of collectors which will help you at purchase of this or that disk. I do not hide the attitude to reprintings for audiophiles. All these marketing tricks, which them … [words missing in newspaper scan]

At the end there that sounds like me going off on one of my rants bashing Heavy Vinyl, Half-Speed Mastering and other tricks designed to fool most audiophiles. You don’t need a Russian newspaper to read that stuff, it’s in almost every listing.

A big thanks to our customer Paul who took the time to enter all the Cyrillic characters into an online translation tool. Revolving objects anyone? (Like the article says, we prefer those of American company VPI.)