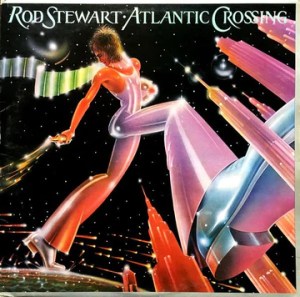 The copies we liked best were the biggest and richest, the least thin and dry. Many of the brighter copies also had noticeable sibilance problems, which the richer and tubier ones did not.

I remember bringing back a few Brit copies from England many years ago and being surprised that they were so thick, dull and dubby sounding. Of course, as it turns out they were. The album was recorded right here in the good old US of A. The master tapes are here. The Brit pressings sound dubby because they are made from dubbed tapes.

If there is any doubt, the following is a list of the studios in which Atlantic Crossing was recorded.

What We’re Listening For on Atlantic Crossing

Atlantic Crossing wasn’t simply the moment when Rod Stewart left Britain for the greener pasture of America, it was the moment when he accepted his role as a full-fledged, jet-setting superstar. Stewart abandoned the formula of his first five solo records, as well as most of his folk-rock and hard rock undercurrents, trading them for a professionally polished, rock- and soul-inflected pop, courtesy of Muscle Shoals’ musicians and producer Tom Dowd.

The glossy production doesn’t obscure or trivialize Stewart’s talents — coming after the tired Smiler, the slickness actually accentuated his strength as an interpretive singer. “Three Time Loser” and “Stone Cold Sober” catch fire, and Stewart’s heart-wrenching rendition of Danny Whitten’s “I Don’t Want to Talk About It” ranks as one of his finest performances.