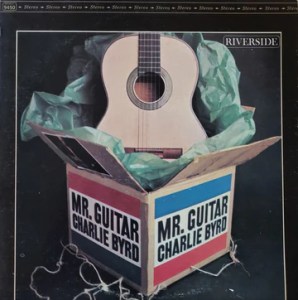 This vintage Riverside pressing has the kind of Tubey Magical Midrange that modern records can barely BEGIN to reproduce. Folks, that sound is gone and it sure isn’t showing signs of coming back. If you love hearing INTO a recording, actually being able to “see” the performers, and feeling as if you are sitting in the studio with the trio, this is the record for you. It’s what vintage all analog recordings are known for — this sound.

What the Best Sides of Mr. Guitar Have to Offer Is Not Hard to Hear

What We’re Listening For on Mr. Guitar

Blues For Felix
Gypsy In My Soul
In A Mellotone
Prelude To A Kiss
Travelin’ On
Play Fiddle, Play

Funky Flamenco
My One And Only
Mama, I’ll Be Home Some Day
How Long Has This Been Going On?
Who Cares?
Lay The Lily Low

A delightful trio outing with an adroit and light feel, also featuring Keter Betts on bass and Bertell Knox on drums. Byrd’s playing combines jazz swing with influences from both Spanish guitar and classical music on a session comprised of both Byrd originals and covers, usually of Gershwin and Ellington tunes.

Betts and Knox are both nimble players who flesh out Byrd’s arrangements without encumbering them, Knox exhibiting a deft touch on the snares in particular. Byrd swings pretty hard on numbers like “Gypsy in My Soul,” and gets more into the Spanish sound on the original “Funky Flamenco”; there is one chance for the musicians to stretch out into more space, on the six-minute “Lay the Lily Low.” It sounds like this album was a substantial influence upon the noted eclectic British folk guitarist Davy Graham, whose debut LP from the early ’60s, Guitar Player, has arrangements that are similar to much of what’s on Mr. Guitar.