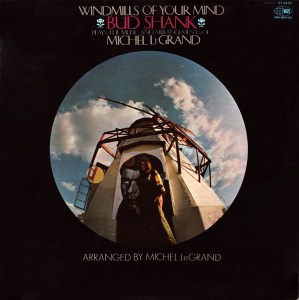 This vintage World Pacific Jazz pressing has the kind of Tubey Magical Midrange that modern records rarely even BEGIN to reproduce. Folks, that sound is gone and it sure isn’t showing signs of coming back. If you love hearing INTO a recording, actually being able to “see” the performers, and feeling as if you are sitting in the studio with Shank, this is the record for you. It’s what vintage all analog recordings are known for — this sound.

What the best sides of Windmills Of Your Mind have to offer is not hard to hear:

What We’re Listening For on Windmills Of Your Mind

De Delphine A Lancien
I Will Wait For You
His Eyes, Her Eyes
Once Upon A Summertime
Chanson Des Jumelles

Windmills of Your Mind was arranged by Legrand and covered all of the composer’s hot material at the time. Which meant three movies—The Thomas Crown Affair, Umbrellas of Cherbourg and The Young Girls of Rochefort. If you’re unfamiliar with any of these movies, all are available at Netflix and are must-sees for jazz fans.

Every track is a French twist on the swinging ’60s, with superb arranging by Legrand and crisp playing by Bud and the orchestra. The album opens with the Thomas Crown Affair’s title song, which is given a paisley feel with Legrand’s harpsichord and strings. Watch What Happens from Umbrellas follows, using a fabulous merging of alto, tenor, trumpet and piano. Legrand here plays tag with Bud on the improvised sections, adding to the track’s dynamism.

The cat-like Theme D’Elise from Umbrellas offers plenty of punch, and Bud both echoes the arrangement and takes a graffiti can to it on the improvised passages. One Day, which Legrand wrote with Alan and Marilyn Bergman in 1967, is a torrid ballad that Bud plays with abandon backed by Legrand on piano and strings.

Chanson de Solange and De Delphine a Lancien are both uptempo burners from Rochefort. The former finds Bud on alto along with a taste of Byers’ trombone and Roberts’ guitar. For the latter, Bud is on flute, running through impossibly fast and complex lines backed by piano and vibes. Though the vibist isn’t named in the album’s personnel, Larry Bunker is a good guess.

I Will Wait for You was the other major standard to emerge from Legrand’s Umbrellas. It’s taken at a variety of tempos, including a series of Supersax-y lines run down by the two saxes, trumpet and organ.

My favorite here is the inquisitive His Eyes, Her Eyes from The Thomas Crown Affair, which sets Bud and Barone off on a wild tear supported by Kane on organ.

Once Upon a Summertime is taken as a scorching ballad. The album ends with another tune from Rochefort—the skippy Chanson des Jumelles, with Barone’s trumpet and Kane’s organ.

The older I get, the more I appreciate Bud’s jazz-goes-’60s efforts—particularly when they sizzle. To his credit, Bud always stuck to his knitting, no matter the trend or fad. On Windmills of Your Mind, that was an easier challenge given Legrand’s French jazz-pop melodies.