Island Is One of Our Favorite Labels 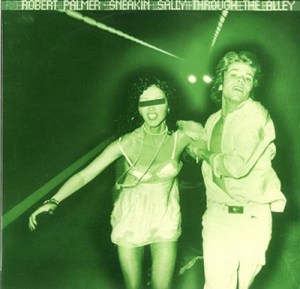 *NOTE: On side two, a mark makes 14 moderate to loud pops at the end of Track 3, Through It All There’s You. Thankfully that is the last song on the side.

What a Backing Band!

The sound on the best copies is superb as well; our old friend Rhett Davies engineered some of it — who knows what part, they don’t break it down — but the other engineers must have done a great job as well as the sound is some of the best analog from the Classic Era, in this case 1974.

What We’re Listening For on Sneakin’ Sally Through The Alley

No domestic pressing could touch our better British imports I’m sorry to say, and I’m sorry to say that because finding the right British pressings in audiophile playing condition is an expensive proposition. (Notice we did not say original pressings, because some of the early reissues can be quite good, although the Pink Rim originals always seem to win the shootouts.)

The early Island domestic pressings, as well as those to follow, are clearly made from copy tapes, not masters, and have the same smeary, veiled, ambience-challenged sound we have come to recognize when the real tapes are not used.

This is, of course, the sound of most Heavy Vinyl pressings, and the reason we don’t like those either.

We pay much too much to get a fairly high percentage of noisy, heavily-played and just plain worn out old records shipped to us from overseas. People seemed to like the record and played it lot, and who can blame them? But when the sound and the music are this good, we make the effort and pay the price. To us it’s worth it.

Before becoming a slick, sharp-dressed pop star in the 1980s, Robert Palmer was a soul singer deeply rooted in R&B and funk. Those influences are on full display on his debut album Sneakin’ Sally Through the Alley. With a backing band including members of Little Feat and the Meters, the music has a laid-back groove whether Palmer’s covering New Orleans legend Allen Toussaint (the title track) or singing originals (“Hey Julia,” ” Get Outside”).

While the music is tight and solid, it is Robert Palmer’s voice that is revelatory — he sounds supremely confident among these talented musicians, and they seem to feed off his vocal intensity. Fans of the Meters or people who want to discover the funky side of Robert Palmer should check this one out.