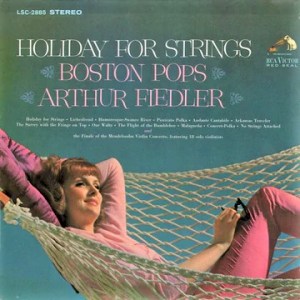 This vintage RCA Victor Stereo (but not Living Stereo, this being 1966) LP has the kind of Tubey Magical Midrange that modern records can barely BEGIN to reproduce. Folks, that sound is gone and it sure isn’t showing signs of coming back. If you love hearing INTO a recording, actually being able to “see” the performers, and feeling as if you are sitting in the studio with the Boston Pops, this is the record for you. It’s what vintage all analog recordings are known for — this sound.

What We’re Listening For On Holiday For Strings

Nowhere in the world is there surer guarantee of more richly varied musical delights than that promised by this conductor’s precise baton, his infallible ear and memory, the prodigious range of his taste, his interpretative verve. Yes, outside Boston at least, the fabulous Fiedlerian success story tends to be taken for granted. His distinctive role as symphonic spokesman to mass audiences is one calculated in win popular adulation. It also earns ultrasophisticates’ supercilious disdain for “mere routine.”

Of course Fiedler can afford to laugh all the way to the bank at such snobbery; yet he is too well grounded a “straight” musician and too sincere an artist to be unaware of the high price that seemingly must always be paid for wide popular acclaim. The Fiedler “image” is well known; it is quite possible that it obscures the true nature of the man himself. 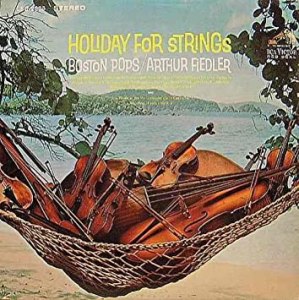