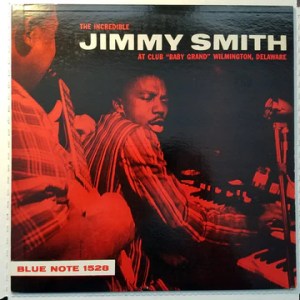 What We’re Listening For on At Club Baby Grand

Sweet Georgia Brown
Where Or When

Playing piano-style single-note lines on his Hammond B-3 organ, Jimmy Smith revolutionized the use of the instrument in a jazz combo setting in the mid-’50s and early ’60s, and he was still the next big thing on the block when he recorded two LP volumes live over the course of two afternoon sets and three evening sets on August 4, 1956, at Club Baby Grand in Wilmington, DE.

Smith had already tracked three successful studio LPs for Blue Note Records at sessions held earlier in the year in February, March, and June, and the time seemed right to present him in a concert setting where the full whirlwind force of his speedy playing could be best appreciated. Working with guitarist Thornel Schwartz and his longtime drummer Donald Bailey (who worked with Smith throughout his Blue Note years), Smith is 90 percent of the show here, bursting out with amazing rapid runs on the B-3, filling the air from one end of the room to the other as only he could.

This first volume is drawn from the three evening sets, opening with what was actually the last selection of the night, a zippy, headlong version of “Sweet Georgia Brown” and highlighted by a nearly 12-minute version of Horace Silver’s “The Preacher,” a piece Smith has already made his own. It’s all Jimmy Smith in full flight, bubbling over with cascading notes and breathless detours, and if his studio work is generally more structured and considered (but only a little more so), this set shows him in what was his natural habitat, astounding an audience in a small club. Bailey keeps up with things and Schwartz gets a word in now and then, but this is Smith’s show all the way.