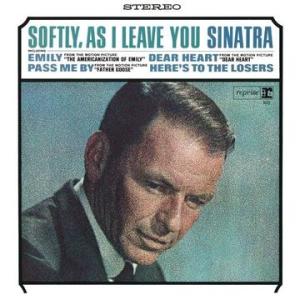 This vintage Reprise LP has the MIDRANGE MAGIC that’s missing from the later reissues. It gives you the sense that Frank Sinatra is right in front of you.

We know a fair bit about the man’s recordings at this point. As of today we’ve done commentaries for 30 different Sinatra shootouts, and that’s not even counting the other titles that either bombed or were sold off years ago.

What The Best Sides Of Softly, As I Leave You Have To Offer Is Not Hard To Hear

What We’re Listening For on Softly As I Leave You

Pass Me By
Softly, As I Leave You
Then Suddenly Love
Available
Talk To Me Baby
The Look Of Love

Softly, as I Leave You was Frank Sinatra’s first tentative attempt to come to terms with the rock & roll revolution, even if it was hardly a rock & roll album.

The highlight of the record was the hit title song, which featured a subdued but forceful and steady backbeat. The rhythm itself was indicative of Sinatra’s effort to accept the new popular music.