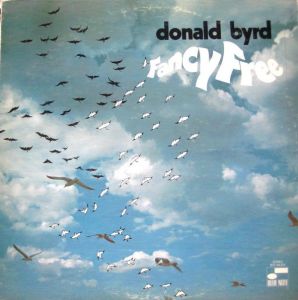 If you’re ready to take a mindblowing jazz fusion trip with sonics to match, you should definitely check this one out.

What the best sides of Fancy Free have to offer is not hard to hear:

What We’re Listening For on Fancy Free

Fancy Free
I Love The Girl

1969’s Fancy Free marked the beginning of Donald Byrd’s move away from hard bop, staking out fusion-flavored territory that — at this juncture — owed more to Miles Davis than the R&B-dominated jazz-funk Byrd would embrace several years down the road. Recorded just a few months after Davis’ In a Silent Way, Fancy Free finds Byrd leading a large ensemble prominently featuring Frank Foster on tenor, Lew Tabackin or Jerry Dodgion on flute, and several percussionists.

But the most important piece of the puzzle is Duke Pearson’s electric piano, the first time Byrd utilized the instrument. Pearson dominates the texture of the group sound, which makes the entirety of the session seem farther outside the realm of funky hard bop than it actually is.

However, that’s not to say that Fancy Free isn’t a clear break with Byrd’s past — especially the two Byrd originals that open the album. The title track — which later became one of Byrd’s more covered compositions — contrasts Pearson’s spacy musings with a busy, funky percussion groove, and there’s a loose, open feel to the improvisations that breaks with hard bop conventions. The warm ballad “I Love the Girl” has a similarly airy feel, and at eight and a half minutes, is the shortest cut; clearly Byrd wanted an open framework for exploration. The other two numbers are more traditional hard bop compositions by former Byrd students, which — although funky and full of improvisations — can’t help but feel more tethered than their predecessors.

Still, even if it isn’t his most adventurous fusion outing, Fancy Free is the rare Donald Byrd album that holds appeal for rare-groove fanatics and traditionalists alike.