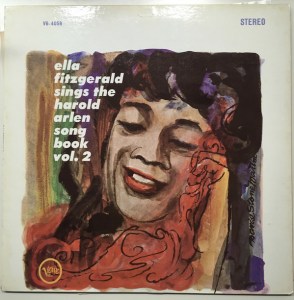 This copy excelled in our shootout, surprising us with its solid weight down low and clarity up top.

Take it from an Ella fan, you can’t go wrong with this one. The sound is rich and full-bodied in the best tradition of a classic vintage jazz vocal album. You could easily demonstrate your stereo with a record this good, but what you would really be demonstrating is music that the listener probably hasn’t heard, and that’s the best reason to demonstrate a stereo!

The space is HUGE and the sound so rich. Prodigious amounts of Tubey Magic as well, which is key to the best sounding copies. The sound needs weight, warmth and tubes or you might as well be playing a CD.

What the best sides of Ella Fitzgerald Sings The Harold Arlen Songbook, Vol. 2 have to offer is not hard to hear:

Copies with rich lower mids and nice extension up top (to keep the arrangements from becoming shrill) did the best in our shootout, assuming they weren’t veiled or smeary of course. So many things can go wrong on a record! We know, we heard them all.

And we know a fair bit about Ella’s recordings at this point. As of today we’ve done commentaries for sixteen different Ella Fitzgerald albums, and that’s not counting the sixteen (yes, 16!) titles we put in our Hall of Shame.

We’ve searched high and low for her records and played them by the score over the years. We plan to keep a good supply on to the site in the coming years so watch for new arrivals in the Vocal section (linked to the left).

What We’re Listening For on Ella Fitzgerald Sings The Harold Arlen Songbook, Vol. 2

Of all of her Songbooks, the Harold Arlen and Duke Ellington sets are the most jazz-oriented. With perfectly suitable arrangements by Billy May for the big band and occasional strings, she really digs into the 26 Arlen songs, giving her own sympathetic interpretations to such classics as “Blues in the Night,” “Stormy Weather,” “My Shining Hour,” “That Old Black Magic,” “Come Rain or Come Shine,” “It’s Only a Paper Moon,” and even “Ding-Dong! The Witch Is Dead.”