Reviews and Commentaries for Countdown to Ecstasy 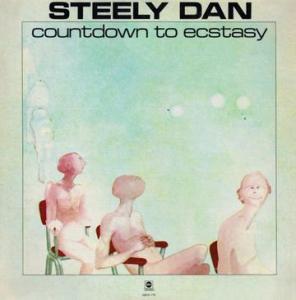 Vintage covers for this album are hard to find in exceptionally clean shape. Most of them will have at least some amount of ringwear, seam wear and edge wear. Some will have cut corners. We guarantee that the cover we supply with this Hot Stamper is at least VG, and it will probably be VG+. If you are picky about your covers please let us know in advance so that we can  be sure we have a nice cover for you.

Razor Boy and My Old School

On Razor Boy listen especially to how clear and solid the piano and vibes are underneath the vocals. On the best copies, their contributions are easy to follow and really provide support in the lower registers for the vocals above them. If your copy they’re a murky mess don’t be surprised; that’s pretty much the way they sound on most copies. (They’re a good test for the quality of your reproduction from the mid-bass up through the lower midrange.)

What We’re Listening For on Countdown to Ecstasy

This album shares top honors with Katy Lied as the toughest Steely Dan album to get to sound right. So many copies are such sonic let-downs: congested, bass-shy, veiled, compressed and grainy. There’s a good reason we don’t do this album but once a year, and it’s not because of a lack of demand. It’s because so many copies sound so bad.

One of the biggest problems with the average copy of this album is congestion. On King Of The World, for example, many copies never quite open up for the chorus. On our Hot Stamper copies, the sound is more spacious, allowing all the voices and instruments room to breathe. The soundfield needs to be BIG and WIDE for this album to work, and on the best copies the sound is HUGE.

Another big problem with the typical copy is a glaring lack of bass. This is Steely Dan, man: last I heard they had a pretty good bass player by the name of Walter Becker. (On later albums he plays guitar, but with Denny Dias and Jeff Skunk Baxter still in the band at this point the guitar duties were already in the hands of the truly gifted.) We have to imagine that the band wanted you to hear bass — and plenty of it. Any copy of this album that doesn’t have lots of deep, punchy, well-defined bass just isn’t gonna cut it.

Think about it: if you had only seven copies, you might not have ever gotten to hear a copy that sounded that open and clear. And how many of even the most dedicated of audiophiles would have more than one of two clean vintage pressings with which to do a shootout? These kinds of records are expensive and hard to come by in good shape. Believe us, we know whereof we speak when it comes to vintage pressings of Classic Rock albums.

This is the track I use to judge side one. Almost every copy you come across has grainy vocals, if there are any highs at all. This is true for the entire album, but it’s especially noticeable on this track. When the vocals are clear, smooth and sweet, or at least as clear, smooth and sweet as one can hope for, you are playing a good copy. Consider yourself one of the lucky ones.

That’s if there’s bass. This is a rock record, and rock records, like all records, need bass. If the vocals on this track are right and the bass is good, you might actually have a winner.

Also listen to how clear and solid the piano and vibes are underneath the vocals. On the best copies their contributions are easy to follow and really provide support in the lower registers for the vocals above them. If your copy they’re a murky mess don’t be surprised; that’s pretty much the way they sound on most copies. (They’re a good test for the quality of your reproduction from the mid-bass up through the lower midrange.)

The Boston Rag
Your Gold Teeth

On every copy we’ve ever played this track is cut substantially louder than those that follow. It also has a “jumping out of the speakers” quality that’s hard to find on the next three tracks. As a Demo Track it would seem to be the best one on the album. As a test track, since it seems to sound good on so many otherwise mediocre copies, it’s practically useless.

Pearl of the Quarter
King of the World

There’s a lot going on in the chorus here, and the average copy suffers badly from congestion. If the copy you have on the turntable doesn’t have much extension up top you can forget about this track sounding any good.

The loud guitars and pronounced backbeat of “Bodhisattva,” “Show Biz Kids,” and “My Old School” camouflage the fact that Countdown is a riskier album, musically speaking, than its predecessor.

Each of its eight songs have sophisticated, jazz-inflected interludes, and apart from the bluesy vamps “Bodhisattva” and “Show Biz Kids,” which sound like they were written for the stage, the songs are subtly textured. “Razor Boy,” with its murmuring marimbas, and the hard bop tribute “Your Gold Teeth” reveal Becker and Fagen’s jazz roots, while the country-flavored “Pearl of the Quarter” and the ominous, skittering “King of the World” are both overlooked gems.

Countdown to Ecstasy is the only time Steely Dan played it relatively straight, and its eight songs are rich with either musical or lyrical detail that their album rock or art rock contemporaries couldn’t hope to match.

Walter Becker and Donald Fagen were wiseass New York musicians stranded in LA. in the early Seventies, and they poured all the cynicism and paranoia of that circumstance into Steely Dan, the most notorious studio band in the annals of classic rock.

Their second album, Countdown to Ecstasy, was the only record by the reclusive duo written for an actual live band, and you can tell— especially on hoo-ha! cuts such as “My Old School,” a catchy little tune about college placement and prostitution, with its pounding, stupidly grinning piano riffs; scorching guitar solos, somehow both showy and unselfconscious; and above all jubilant horn charts.

“The Boston Rag” begins as a sophisticated, jazzy number, but then the band players forget themselves: The solo by Jeff “Skunk” Baxter is as nasty, distorted and molten as rock guitar has ever been. The jump and jive of Bodhisattva is so celebratory, it could be the music for a Looney Tunes cartoon.

Smart, conflicted bands from Weezer to the Eels owe Steely Dan big time, not because guys with glasses should stick together, but because on Countdown to Ecstasy, the band was human, not just brainy. Like good stretches of the Stones’ Exile on Main Street, this is a record where Steely Dan let slip their extraordinary mask of sarcasm, and could not disguise the joy in these excellent songs, or the fact that they were having a blast playing them. – Pat Blashill