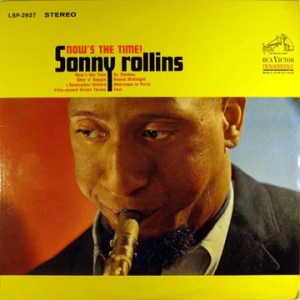 Ray Hall handled the engineering duties for this album and a host of other great albums for RCA, albums we know were brilliantly recorded because we’ve done shootouts for them and heard the best copies sound amazing with our own two ears.

Some of the better titles that come to mind include:

What We’re Listening For on Now’s The Time

What do we love about LIVING STEREO pressings? The timbre of every instrument is Hi-Fi in the best sense of the word. The instruments on this vintage recording are reproduced with remarkable fidelity.

Now that’s what we at Better Records mean by “Hi-Fi,” not the kind of Audiophile Phony BS Sound that passes for Hi-Fidelity these days. There’s no boosted top, there’s no bloated bottom, there’s no sucked-out midrange. There’s no added digital reverb (Patricia Barber, Diana Krall, et al.). The microphones are not fifty feet away from the musicians (Water Lily) nor are they inches away (Three Blind Mice).

Here is a list of Living Stereo titles we have on the site at this time.

Not too long before he left this RCA, Sonny Rollins took a look backward and decided to devote himself to the great jazz standards such as the title tune, “I Remember Clifford”, “Four”, “An Afternoon in Paris”, “Round Midnight” and his own “St Thomas”.

Rollins is in great virtuosic form here and he’s ably backed by Herbie Hancock, Ron Carter, Bob Cranshaw, and Roy McCurdy plus on “52nd St Theme (Monk), Thad Jones on trumpet joins Sonny in a battle royal. The only reason I’m giving this 4 stars instead of 5 is because of the brevity of the cuts–I’d would’ve liked to have heard more of Sonny’s virtuosity-but I still recommend for all you Sonnyphiles!!