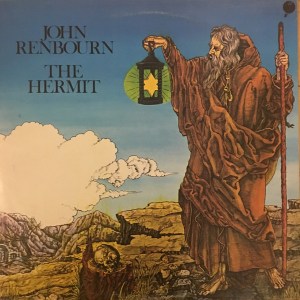 *NOTE: A mark makes 5 very light to light ticks at the end of track 1, The Hermit.

This vintage UK Transatlantic pressing has the kind of Tubey Magical Midrange that modern records rarely even BEGIN to reproduce. Folks, that sound is gone and it sure isn’t showing signs of coming back. If you love hearing INTO a recording, actually being able to “see” the performers, and feeling as if you are sitting in the studio with Renbourn, this is the record for you. It’s what vintage all analog recordings are known for — this sound.

What the best sides of The Hermit have to offer is not hard to hear:

Those of you looking for quiet vinyl will have to settle for the sound of later pressings and Heavy Vinyl reissues, purchased elsewhere of course as we have no interest in selling records that don’t have the vintage analog magic that is a key part of the appeal of these wonderful originals.

John Renbourn on The Hermit

During the time Pentangle was on the road I got a bit out of touch with the way things were developing on the acoustic guitar front. When the band stopped touring l discovered there had been quite some goings on. There were a lot of young players out there in the world coming up with good stuff on the fingerstyle steel-string guitar and it was nice to think that the approach of British players had been an influence.

By that time l had moved out into the country and I consciously set about working on guitar arrangements that might make a further contribution. Pieces that relied less on improvisation and which could be notated and passed on intact.

l borrowed ideas from various instruments, the lute, keyboard, and irish harp, and made up others which I suppose took ideas that went back to ‘Lady Nothynges Toye Puffe’ a stage further. John James, another old Transatlantic man, joined me on duets as did Dominique Trepeau, a representative for the Paris delegation.

John Renbourn’s first post-Pentangle (or nearly post-Pentangle) solo album, joined briefly by fellow guitarist Dominique Trepeau and featuring further contributions by John James, is one of his most beautiful recordings, and also among his most spare guitar instrumentals. Some of the material is drawn from lute and harp sources, and it is ear-opening to hear some of the more familiar pieces among the latter (such as “O’Carolan’s Concerto”) transcribed for guitar, but Renbourn isn’t above adapting themes from television commercials, either. The mood of much — though not all — of Hermit is one of serious introspection, as Renbourn stays generally within a classical guitar mode.