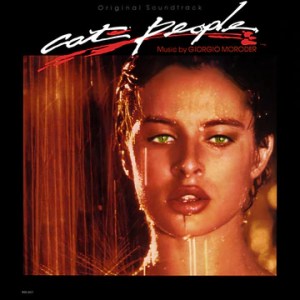 Stunning sound graces both sides of this TAS List Super Disc! We just finished a big shootout for this album, and this knockout copy sounded far better than most of the competition. Drop the needle on any track for some of the best sounding synthesizers you’ll ever hear!

Monstrously huge on both sides, with punchy bass and full-on major Whomp Factor! This kind of low frequency energy really fills the room; the soundscape is wall to wall and floor to ceiling. We know what Harry likes about this one — the Big Bold Sound with tons of Bottom End — and we have to admit that we like it too. This is the kind of record that KILLS on big speakers.

Eno fans should get a lot out of this one, as should anyone who digs the crazy sound of analog synthesizers of the ’70s and early ’80s. The Bowie track (Cat People) is great, of course, but you won’t find anything else resembling a pop song here — just a bunch of dark, trippy soundscapes with animal noises and some wild sound effects.

It isn’t easy to find clean copies of this one anymore. Much like Sergio Mendes’ Stillness, there are passages on here that are being sampled and turned into rap songs. Hey, with all these wild synth sounds, plus the funky Lee Sklar handling bass duties, who can blame ’em?!

Both sides jump out with big and bold sound with in-the-room presence. On this Hot Stamper, you get more texture to the synths than the typical veiled copy. It’s sweet up top and rockin’ down low. There is tons of ambience around the snare that gives the crisp attack plenty of room to shine.

The transparency is uncanny. It’s open, airy, and spacious up top. All of the ambience and presence we require are here in spades. The tight punchy bass is phenomenal on this copy. The extension on both ends of the frequency spectrum is exceptional.

What We’re Listening For on Cat People

It’s time to trot out our thoughts on the TAS List once again. Those of you who have been following the site for a long time may know these lines by heart by now, so feel free to sing along!

There’s a reason this record is on the TAS list, but you’d never know it by playing the average Backstreet pressing. Most copies of this record would never be considered a Super Disc. You would never even know how magical this recording is by playing a copy that for all intents and purposes appears to be the pressing that Harry Pearson is recommending on his Super Disc list. The catalog number is the same; the sound is not. Unless you have at least a dozen copies of this record, you have very little chance of finding even one exceptional side.

This has always been the problem with the TAS list. The pressing variations on a record like this are HUGE and DRAMATIC. There is a world of difference between this copy and what the typical audiophile owns based on HP’s list. I’ve been complaining for years that the catalog number Harry supplies has very little benefit to the typical audiophile record lover. Without at least the right stampers, the amount of work required to find a copy that deserves a Super Disc ranking is daunting, requiring the kind of time and effort that few audiophiles could ever devote to such a difficult and frustrating project.