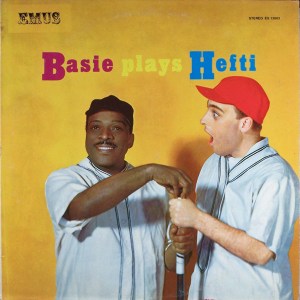 This is the followup to the smash Basie album The Atomic Mr. Basie, an album we would love to make available if we could ever find a clean, good sounding copy to play. The liner notes tell the story of this album well. Click on the tab above to read them.

Basie was recording like a madman back in the late ’50s and even all through the ’60s. In 1958, the year of this release, he put out seven (7!) albums on the Roulette label. We’ve played quite a number of them over the years and found relatively few with audiophile quality sound.

Including the original Roulette pressing of this very title. We’ve only heard a few, and had only one for our shootout, but it was awful enough to make us swear off buying more, especially considering the prices vintage jazz albums are going for these days. Hard and sour brass, no real top or bottom, it’s the sound of a poorly mastered Old Jazz Record, fine for the consoles of the day, not so good on today’s advanced stereo systems. Emus seems to be the only way to go.

And of course we absolutely loved the music. I had a chance to see the Basie Big Band perform not long ago at Disney Hall and a fairly large chunk of the music and arrangements they play these days are Neal’s, practically half I would venture to guess. Meaning simply that Hefti’s music has clearly stood the test of time. Play this album and you’re sure to see what I mean.

What We’re Listening For on Basie Plays Hefti

The Count Basie Orchestra was in top form for this set of Neal Hefti arrangements. Hefti had been one of the main architects of the new Basie sound of the ’50s and on this memorable date he utilizes the flute of Frank Wess prominently. “Cute” (heard here in its initial recording) became a standard.

SOME ARRANGERS SEEM made to order for certain bands. Don Redman and Benny Carter and Horace Henderson fitted a variety of organizations in the twenties and thirties in this way. Billy Strayhorn was obviously born to write for the Duke Ellington band as Sy Oliver was to write for Jimmie Lunceford and Fletcher Henderson for Benny Goodman. And now it seems that Neal Hefti has found his band in Count Basie and Count his composer and arranger in Neal.

Like Fletcher’s writing for Benny’s musicians, Neal’s suits the tastes and temperaments of the Basie men in every sort of detail. It provides settings for soloists which bring them out bar by bar, texture by texture, idea by idea as they rarely have been before. It is a style of scoring at least as much intuitive as it is instructed in the thinking and playing procedures of these jazzmen.

Some, either because of a similar set of likes and dislikes or because of his keen ear or considerable playing and writing experience, Neal knows the right figures to make Frand Wess blow his most forceful flute, Joe Newman his most swinging trumpet, Snookie Young his most soulful horn and Thad Jones his most elegant. One way or another, he has provided Marshall Royal with an adequate background for his large alto sound and given the Basie tenormen, Billy Mitchell and Frank Foster, a spacious alley in which to chase each other and found room for Al Grey’s big, guttural trombone pushes and pulls.

Altogether, this is a sounding record. As in the previous Basie collection in this series, the band has been brought back alive. It is again startling to hear the full power of the full band and to have again the dynamic brilliances of brass and reeds preserved intact. It is a wonderful experience to hear Frank Wess’s flute vibrating like the wind instrument it is and not at all overshadowed by the rest of this loud, proud band, and it is a considerable kick to be able to observe, in detail, the nuances of tone and minutiae of technique which separates the trumpet sounds of Snookie Young and Joe Newman and Thad Jones from each other. When Basie plays Hefti and is recorded this way, it is an event, one that I am pleased to able to salute.

Basie reformed the jazz orchestra in 1952 for a series of tours, not only in the United States, but also in Europe in 1954 and Japan in 1963. The band released new recordings; some featuring guest singers such as Joe Williams, Frank Sinatra, Ella Fitzgerald and Billy Eckstine. All relied on contributions from arrangers, some of whom are now synonymous with the Basie band: Neal Hefti, Quincy Jones and Sammy Nestico. Michael G. Nastos wrote of the recording with Eckstine:

“When the Count Basie Orchestra consented to team up with vocalist Billy Eckstine, choruses of angels must have shouted hallelujah. The combination of Basie’s sweet jazz and Eckstine’s low-down blues sensibilities meshed well on this one-shot deal, a program mostly of downtrodden songs perfectly suited for the band and the man.”

This new band became known as “The Second Testament”. With albums such as The Atomic Mr. Basie (1958), April in Paris (1957) and Basie Plays Hefti (1958), the new Count Basie Orchestra sound became identifiable. The sound of the band was now that of a tight ensemble: heavier and more full bodied, contrasting with the riff-based band of the late 1930s and early 1940s. Whereas previously the emphasis had been on providing space for exemplary soloists such as Lester Young and Buck Clayton, now the focus had shifted to the arrangements, despite the presence of soloists such as trumpeter Thad Jones and saxophonist Frank Foster.