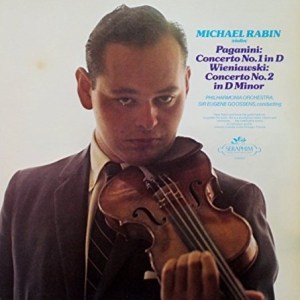 The AMAZING Michael Rabin is the principal violinist. His playing of these exceptionally difficult pieces is legendary. Recorded by Capitol in the late ’50s, his fiery performance is breathtaking, with the kind of energy, excitement and technical proficiency that is second to none in our experience.

There’s a very good chance that you have NEVER heard a better sounding violin concerto record than this one. It’s clearly superior to most of the pressings that audiophiles would hold dear; we’ve played them by the score. The fact that it’s on a budget label reissue label, to my mind, is the icing on the cake. (There’s a valuable lesson here to be learned if only more audiophiles will make the effort to learn it.)

There are two recordings of the Paganini Concerto No.1 we like currently; this one, and the Menuhin on EMI. We prefer Rabin’s sound and performance, but the EMI engineers managed to record their orchestra with slightly more natural fidelity. Both are of course superb. (We love the mono recording Ricci did for London in the mid-’50s but the sound and surface quality are not competitive with the two recordings above.)

With grades like these, you can be assured that the quality of the mastering and pressing here are both superb.

What the best sides of this classical delight have to offer is not hard to hear:

This copy KILLS the out of print Testament 180 gram version from circa 2000 (which is not a bad record by any means). Can’t say how it compares to the original — we haven’t had one in years.

Paganini’s Concerto for Violin and Orchestra No. 1 is a virtuosic tour de force and reveals not only Paganini’s incredible technical ability, but also his melodic sensitivity and skillful exploitation of dramatic structure.

Like many of his other works, this concerto takes inspiration from the musical language of Gioachino Rossini’s operas, which were extremely popular at the time. Paganini originally composed the Concerto No. 1 in the unusual key of E flat major, in order to achieve a more brilliant tone for the violin. However, since modern concert pitches are much higher than was the norm in Paganini’s era, the standard modern version of the piece is transposed to the key of D major, which also makes the very thin E string of the violin less susceptible to breakage (Paganini often broke several strings during a single concert performance).

By modern standards the technical demands of the concerto are only moderate, but in Paganini’s time they were considered tremendous, and many contemporaries branded the piece “unplayable.” This, of course, served as valuable publicity that helped Paganini become the most popular soloist of his day. The work is indeed a catalog of such flashy techniques as extended arpeggios, left-hand pizzicati, rapid runs in thirds, fifths, and even harmonics.

The work is more than a mere virtuoso showpiece, however. Paganini’s concerto is filled with elegant melodic themes, and there are moments of striking beauty. One legend holds that Paganini composed the main theme of the second movement on a one-string violin while languishing in prison under suspicion of a murder he did not commit. Such legends grow up naturally around the dynamic (and, some said, demonic) Paganini, but they also reflect the appeal and mystique of his music.

Paganini’s aura of mystery was amplified by his refusal to allow his works to be published during his lifetime, making it impossible for his rivals to study and master his techniques. The Concerto No. 1 was published only after his death, and it soon became a fixture in the repertoire of lesser virtuosos who were as adept, more or less, in the technical department, but not nearly as musically compelling as Paganini. Fortunately, many great twentieth century soloists have concentrated on the musicality of the piece as much as the virtuosity.

Henryk Wieniawski might have thought twice about dedicating his last and greatest work for violin and orchestra, the Violin Concerto No. 2 in D minor, Op. 22 of 1862, to the famous Spanish violinist Pablo de Sarasate had he known that a quarter century after he wrote the piece he and Sarasate would be rivals in a very real and commercially measurable way; the two were certainly the foremost violinist-composers of their day (at least after Vieuxtemps’ career-ending illness).

Composing a virtuoso concerto in the nineteenth century was not an enviable task, especially if one was to play it oneself: the virtuoso drew audiences by exploiting technical excellence and by indulging that audience in a perhaps inordinate amount of sweet, syrupy melody, and usually that meant intentionally writing music that would have little durability. Wieniawski’s own Violin Concerto No. 1 in F sharp minor, Op. 14 was a big hit that made his name throughout Europe; but today, forced to stand or stumble on its lasting merits as a work of music, it is largely ignored.

When Wieniawski set about composing his Second Concerto, he took a different approach; while still ensuring that the work had its quota of flash-and-dazzle and sweet song, Wieniawski made certain to provide his new child with the kind of dramatic backbone and excellent musical structure that are usually lacking in such works. It is no “Emperor” Concerto, to be sure, but Wieniawski’s Second can hold its own in some pretty imposing company. Most critics and musicians of the day were far more bowled over by the piece itself than by Wieniawski’s renditions of it.

The concerto is in three movements: Allegro moderato, Andante non troppo (Romance), and Allegro con fuoco-Allegro moderato. An urgent melody opens the orchestral exposition of the first movement, and when the violin enters it takes over this lyrical weave. It is inevitable that showy finger-work takes over the movement at some point, but, rather unusually, there is no cadenza to the movement. Instead, the movement builds to a fine virtuoso climax and then makes its way, via a closing passage for the orchestra alone, straight to the following Romance, which surely must count among the most straightforwardly beautiful instrumental songs ever composed.

The finale is marked “à la Zingara” — and gypsy it is, from the frantic moto perpetuo that is the movement’s main theme to the robust, earthy dance in D major that breaks in twice, the second time to draw a clamorous, show-stopping close.