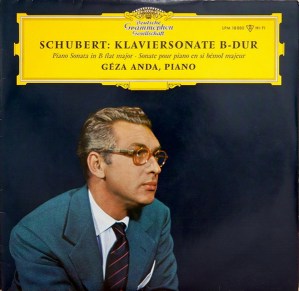 This Super Hot Stamper original Large Tulips DG pressing (with stereo in red on the cover) has the kind of Tubey Magical Midrange that modern records cannot even BEGIN to reproduce. Folks, that sound is gone and it sure isn’t showing signs of coming back. If you love hearing INTO a recording, actually being able to “see” the performers, and feeling like you are sitting in a real concert hall, this is the record for you. It’s what Golden Age Classical Recordings are known for — THIS SOUND.

If you exclusively play modern repressings of vintage classical recordings, the kind that are coming out from Speakers Corner just to take one example, or used to be made by Classic Records by the score, I can say without fear of contradiction that you have never heard this kind of sound on vinyl. Old records have it — sometimes, not often — and new records do not, ever.

What is lost in these newly remastered recordings? Lots of things, but the most obvious and bothersome is TRANSPARENCY. Modern records are just so damn opaque. Who can stand that sound? It drives us crazy.

But enough about how bad new records are. Let’s talk about how good this record is.

A++ Super Hot Stamper sound and quiet vinyl make this a wonderful side. It’s so natural sounding. True, the imaging is a bit vague, but you may have noticed, as I have, that in the concert hall imaging oftentimes is not all that good either.

A++ to A+++, which means BETTER than Super Hot Stamper sound. It’s even more transparent, yet the piano is every bit as full and rich and Tubey Magical as one could hope for.

And Geza Anda’s perfromance of the work is widely considered definitive.

The three piano sonatas numbered 958, 959 and 960 in Deutsch’s catalogue of Franz Schubert’s complete works are the composer’s last major compositions for the piano, often referred to simply as Schubert’s last sonatas. They were written during the last months of Schubert’s life, between the spring and autumn of 1828, but were not published until about ten years after his death, in 1838-39.[1] Furthermore, like the rest of Schubert’s piano sonatas, they were mostly neglected during the entire 19th century, and have only gradually achieved public appreciation, after more than 100 years since their composition.[2] By the late 20th century, however, public and critical opinion had changed, and Schubert’s last sonatas are nowadays considered amongst the most important of the composer’s mature masterpieces. They have become essential members of the piano repertoire, appearing regularly on concert programs and recordings.

One of the reasons for the long period of neglect of Schubert’s piano sonatas seems to be their dismissal as structurally and dramatically inferior when compared with the famous sonatas by Beethoven.[4] In fact, the last sonatas contain distinct allusions and similarities to works by Beethoven, the composer whom Schubert venerated.[5] However, musicological research from around the turn of the 21st century has shown that they maintain a mature, individual style, quite different from Beethoven’s but holding its own virtues. Nowadays, Schubert’s last sonatas are often praised for their mature style, manifested in unique features such as a cyclical formal and tonal design, chamber music textures, and a rare depth of emotional expression.[6]

The three sonatas have been shown to be cyclically interconnected by diverse structural, harmonic and melodic elements tying together all movements in each sonata,[7] as well as all three sonatas together;[8] consequently, they are often regarded as a trilogy. They also contain specific allusions and similarities to other works by Schubert such as his Winterreise song cycle; these connections suggest an emotional turmoil inherent in the sonatas, which is often ascribed to the harsh reality of Schubert’s late life.[9] Some researchers have even suggested specific psychological narratives for the sonatas, based on historical evidence concerning the composer’s life.

Schubert’s three last sonatas have many structural features in common[19]. Each sonata consists of four movements, in the following order:

First movement in moderate to high speed, and in sonata form. The exposition consists of two or three thematic and tonal areas and, as common in the Classical style, moves from tonic to dominant (in major mode works) or to the relative major (in minor mode works). However, as often with Schubert, the harmonic scheme of the exposition involves additional, intermediate tonalities, which may be quite remote from the tonic-dominant axis, and sometimes imbue certain expository passages with the character of a development section. The main themes of the exposition are often in ternary form, with their middle section digressing to a different tonality. The themes generally do not form symmetrical periods, and irregular phrase lengths are prominent. The exposition ends with a repeat sign. The development section opens with an abrupt turn into a new tonal area. A new theme, based on a melodic fragment from the second thematic group of the exposition, is presented in this section over recurrent rhythmic figuration, and then developed, undergoing successive transformations. The first thematic group returns in the recapitulation with different or additional harmonic digressions; the second group returns unaltered, only transposed a fourth up. The short coda maintains the tonic key and mainly soft dynamics, achieving a resolution of the movement’s conflicts and ending pianissimo.

Slow second movement, in a key different from the tonic, and in A–B–A (ternary) or A–B–A–B–A form. The main sections (A and B) are contrasted in key and character, A is slow and meditative; B is more intense and animated. The movement begins and ends slowly and quietly.

Scherzo or minuet in the tonic, and trio in a different key. The scherzo proper is in ternary (A–B–A) form, its B section digressing to new keys – keys which had a prominent dramatic role in the previous movements. The trio is in binary or ternary form. Finale in moderate to high speed, and in sonata or rondo-sonata form. The themes of the finales are characterized by long passages of melody accompanied by relentless flowing rhythms. The exposition is to be played only once. The development section is more ordinary in style than that of the first movement, with frequent modulations, sequences, and fragmentation of the exposition’s first theme (or the main theme of the rondo).[20] The recapitulation closely resembles the exposition, with the minimal harmonic changes needed to end the section in the tonic: the first theme returns in a shortened version; the second theme returns unaltered, only transposed a fourth up. The coda is based on the exposition’s first theme. It is composed of two parts, the first quiet and attenuated, creating a sense of expectation, the second animated, dissipating the final tension in decisive, agitated motion and ending with fortissimo tonic chords and octaves.