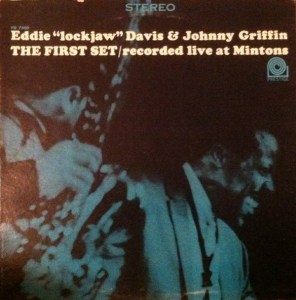 This vintage Prestige pressing has the kind of Tubey Magical Midrange that modern records rarely even BEGIN to reproduce. Folks, that sound is gone and it sure isn’t showing signs of coming back. If you love hearing INTO a recording, actually being able to “see” the performers, and feeling as if you are sitting in the studio with the band, this is the record for you. It’s what vintage all analog recordings are known for — this sound.

What the best sides of Live At Minton’s – The First Set have to offer is not hard to hear:

During the night of July 6, 1961, the two-tenor quintet co-led by Johnny Griffin and Eddie “Lockjaw” Davis recorded enough material to fill up four LPs; surprisingly, Fantasy has not yet reissued any of the sets in their Original Jazz Classics series.

Two of the albums (The Tenor Scene and The Midnight Show) were last available on a two-LP set. Griffin and Davis, competitive tenors with different sounds, battle each other on ten selections with the assistance of pianist Junior Mance, bassist Larry Gales and drummer Ben Riley…

Exciting music that deserves to be made more widely available.

One of the lost jewels of the bebop era, this masterpiece features the bossest tenors in the business, plus blues-drenched Junior Mance at the keyboard, for a dazzling live set so full of passion you can hardly stay in your seat. Both tenors were at the top of their form, never better than when they were together, drawing out the fire in each other, not so much in competition as in mutual respect. Griffin is a technician advanced as Coltrane or Rollins in his melodic agility. Lockjaw Davis has, well, the jaws. His embrochure and tone are only rivalled by Ben Webster: but while Ben is the poet, Lockjaw is the virtuoso. Together, Lockjaw and Grif burn brighter than any tenor tandem in bebop, and that includes the bosses, Stitt and Ammons.

This tenor tandem recorded at least ten albums together. Noteworthy is their selection of tunes. While most tenor duos jammed on simple riffs, these two chose the complex melodies and harmonics of Thelonious Monk. This music is both emotional and intellectually challenging. The crowd at Minton’s that night was really into the music, and their backround presence on the recording only makes the music more gritty, more real. And you are right there! This quintet ought to be rediscovered NOW!