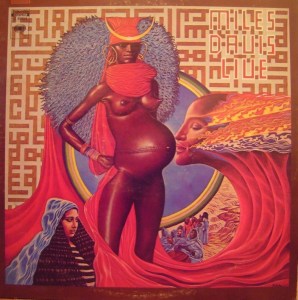 *NOTE: On side three, a noisy intro to track 1, Selim, clears up.

These vintage Columbia stereo pressings have the kind of Tubey Magical Midrange that modern records rarely even BEGIN to reproduce. Folks, that sound is gone and it sure isn’t showing signs of coming back. If you love hearing INTO a recording, actually being able to “see” the performers, and feeling as if you are sitting in the studio with the band or listening live in the audience, this is the record for you. It’s what vintage all analog recordings are known for — this sound.

What the best sides of Live-Evil have to offer is not hard to hear:

What We’re Listening For on Live-Evil

What I Say
Nem Um Talvez

Inamorata and Narration by Conrad Roberts

Live-Evil was released by Columbia Records in 1971 to critical acclaim. In a contemporary review for Rolling Stone, Robert Palmer said “this sounds like what Miles had in mind when he first got into electric music and freer structures and rock rhythms”. He called the shorter, ballad-like recordings “things of great beauty”, devoid of solos but full of “stunning, bittersweet lines”, while also praising each band member’s soloing on the live jams: “Everybody is just playing away, there aren’t any weak links, and there isn’t any congestion to speak of. Miles reacts to this happy situation by playing his ass off, too”. Black World critic Red Scott remarked that all of Live-Evil’s songs “fuse into a perfect complement of musicians passing moods to each other”. Pete Welding from Down Beat was less enthusiastic in a two-and-a-half star review, finding the live recordings characterized by “long dull stretches of water-treading alternating with moments of strength and inspiration”.

The magazine’s John Corbett later called Live-Evil “an outstandingly creative electric collage”, while Erik Davis from Spin found the music “kinetic” and described McLaughlin’s playing as “Hindu heavy-metal fretwork”. Pitchfork’s Ryan Schreiber believed it was “easily the most accessible of Miles Davis’ late-’70s electric releases”, describing its music as “at once both sexually steamy and unsettling”. He said the live recordings “run the gamut from barroom brawl action-funk to sensual bedroom jazz magic, creating two hours of charged eccentricity you’ll never forget”. Robert Christgau said that apart from the meandering “Inamorata”, the “long pieces are usually fascinating and often exciting”, including “Funky Tonk”, which he called Davis’s “most compelling rhythmic exploration to date”. He believed the shorter pieces sounded like “impressionistic experiments”, while “Selim” and “Nem Um Talvez” appropriately “hark back to the late ’50s”. Edwin C. Faust from Stylus Magazine called Live-Evil “one of the funkiest albums ever recorded” while deeming the “somber” short pieces to be “haunting examples of musical purity—Miles enriching our ears with evocative melodies (his work on Sketches of Spain comes to mind) while the bass creeps cautiously, an organ hums tensly, and human whistles/vocals float about forebodingly like wistful phantoms”.