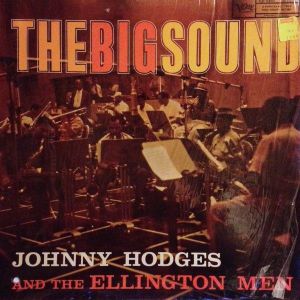 *NOTE: On side two, a mark makes 4 moderately loud pops near the beginning of track 2, Johnny Come Lately.

This vintage Verve T-label pressing has the kind of Tubey Magical Midrange that modern records rarely even BEGIN to reproduce. Folks, that sound is gone and it sure isn’t showing signs of coming back. If you love hearing INTO a recording, actually being able to “see” the performers, and feeling as if you are sitting in the studio with the band, this is the record for you. It’s what vintage all analog recordings are known for — this sound.

What the best sides of The Big Sound have to offer is not hard to hear:

What We’re Listening For on The Big Sound

No surprises, but the session was as good as one might hope. Gathered here was the Ellington band with Billy Strayhorn at the piano. While it was not an Ellington record, the band brought its solid qualities in backing and the occasional solo to all the fine Hodges features. This was an integrated unit, not some detached studio band for Hodges to blow over, under, around, and through. It was wonderful Hodges and fine Ellington.