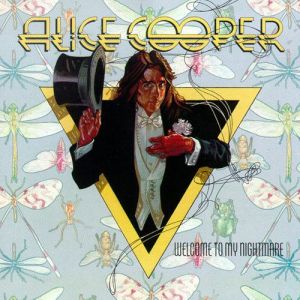 Sometimes the copy with the best sound is not the copy with the quietest vinyl. The best sounding copy is always going to win the shootout, the condition of its vinyl not withstanding. If you can tolerate the problems on this pressing you are in for some outstanding Alice Cooper music and sound. If for any reason you are not happy with the sound or condition of the album we are of course happy to take it back for a full refund, including the domestic return postage.

What the best sides of Welcome To My Nightmare have to offer is not hard to hear:

What to Listen For on Welcome To My Nightmare

Less grit – smoother and sweeter sound, something that is not easy to come by on School’s Out.

More bass and tighter bass. This is fundamentally a pure rock record. It needs weight down low to rock the way Cooper wanted it to.

With the 1974 disintegration of the original Alice Cooper group, Alice was free to launch a solo career. He wisely decided to re-enlist the services of Bob Ezrin for his solo debut, Welcome to My Nightmare, which was a concept album tied into the story line of the highly theatrical concert tour he launched soon after the album’s release.

While the music lost most of the gritty edge of the original AC lineup, Welcome to My Nightmare remains Alice’s best solo effort — while some tracks stray from his expected hard rock direction, there’s plenty of fist-pumping rock to go around. The disco-flavored, album-opening title track would be reworked on the stage as more of a hard rock tune, while “Some Folks” dips into cabaret territory, and “Only Women Bleed” is a sensitive ballad that became a Top Ten hit. But the rockers serve as the album’s foundation — “Devil’s Food,” “The Black Widow,” “Department of Youth,” and “Cold Ethyl” are all standouts, as is the more tranquil yet eerie epic “Steven.”

Despite this promising start to Cooper’s solo career, the majority of his subsequent releases were often not as focused and were of varying quality.