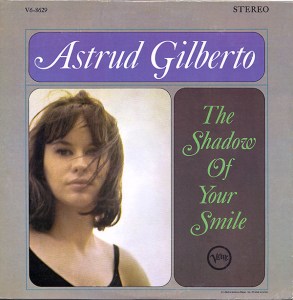 The space is HUGE and the sound so rich. The vocals have dramatically less hardness and the orchestra sounds right for once. Prodigious amounts of Tubey Magic as well, which is key to the best sounding copies. The sound needs weight, warmth and tubes or you might as well be playing a CD.

If you don’t like at least some reverb on your vocals, this album is probably not for you. The standard recording approach for Male and Female Vocals in the ’50s and ’60s was to add reverb to them. Sometimes it sounds right and sometimes it’s too much. For “too much” play some of Nat King Cole’s records from the era to hear what I mean. (Try “Those Lazy-Hazy-Crazy Days of Summer” from 1963 if you want a good place to start.)

Like any processing of the sound in the studio — compression, limiting, reverb, EQ, etc. — it can be used with taste and discretion and make the recording better, or it can be overdone and ruin everything. For our part we think Astrud Gilberto’s recordings use reverb more or less tastefully. And of course there sure aren’t going to be any versions of this music coming along any time soon without the added echo. Getting the reverb to sound right is one of the things a good Hot Stamper has to do on a record like this.

Creed Taylor was the producer, and the engineers are many: